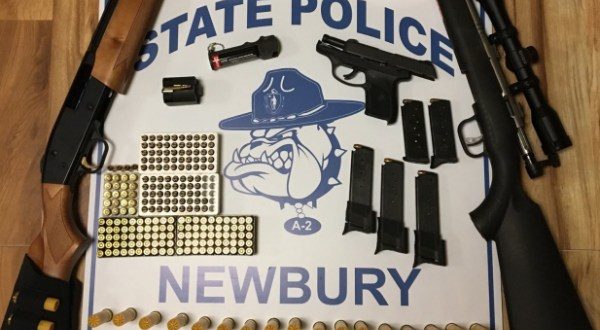 On Tuesday at approximately 1:50 a.m., Trooper Michael Geniglia, working out of the State Police Newbury Barracks, was patrolling Interstate 95 northbound in Boxford when he observed a white Nissan Altima with temporary Virginia plates traveling in the left lane not actively passing any other vehicles and drifting over the fog line toward the median. Trooper Geniglia activated his emergency lights, and conducted a motor vehicle stop. The Nissan slowed to a nearly complete stop in the left lane and the drivers head ducked out of view. The driver was directed to pull into the breakdown lane.

Trooper Geniglia approached on the passenger side, as he did the driver lit a cigarette. The driver gave a Texas driver’s license which identified him as a 30-year-old male from Houston, TX. As the driver reached over to hand the Trooper his license a large fixed blade knife could be seen in the driver’s door. Trooper Geniglia also observed a soft shell rifle case on the floor in the rear of the Nissan.

In fear for his safety with the driver ducking out of view and several weapons visible, Trooper Geniglia had the driver exit the vehicle. As the driver did so he put hand in his right pocket. Trooper Geniglia quickly removed his hand and located a loaded 9mm magazine. A pat frisk revealed an empty holster and a folding knife. The driver was placed in handcuffs and secured in the cruiser.

Trooper Geniglia determined that the driver did not have a license to carry a firearm or a Firearms Identification Card. He was transported to the Newbury Barracks where he was booked on the following charges.

Bail was set at $10,000. Following booking at the barracks, the driver was transported to the Middleton House of Correction in Middleton.

Previous Bishop Stang Theatre Company to present Play On!
Next HELP WANTED: City of New Bedford is hiring for an After-School Monitor position