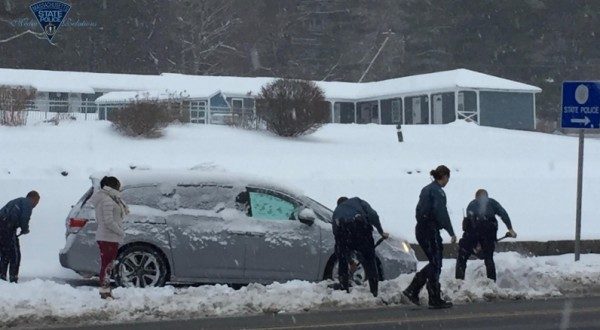 “A motorist from Connecticut got stuck in the snow in Sunday night’s storm and called for a tow truck, which brought her to the Rodeway Inn across the street from State Police-Lee. The Inn was not plowed so the tow truck driver dropped her car at the bottom of their driveway and she spent the night at the Inn.

Monday morning, just after shift change to day shift, the stranded motorist walked into the Barracks and asked about having her car towed out because the bottom of the driveway, where her car had been left, had been plowed in overnight.

The Troopers at the Barracks — Tpr. Andy Fox, Tpr. Brendan O’Neill, Tpr. Hanna Chamberland and Tpr. Mike DeCaro — sprang into action and went over and dug the woman’s car out, proving true the old adage that MSP aims to serve others in need, whatever the need.” – Massachusetts State Police.