Massachusetts State Police answers the questions “What’s that red sticker on the cruiser?”

As part of the ongoing recognition of the 100th anniversary of the State Police Patrol, the uniformed patrol division of the Massachusetts State Police, Department cruisers are affixed with a sticker that replicates the first patch worn by those patrolmen.

The patch, known as the “red acorn patch” was worn from 1921-1926, on a green blouse coat over a white shirt and red tie — perhaps surprisingly for those familiar with the MSP’s iconic French and Electric Blue color scheme. An article published in The North Adams Transcript on April 25, 1925 read: “State Troopers Wear Bright Red Shields.

Every member of the state constabulary, which has a sub-station in Cheshire, is now wearing a bright red shield on his right shoulder bearing the title, ‘State Police,’ in white letters. The shield is somewhat similar to the divisional insignia worn on the shoulders of World war soldiers, and is designed to distinguish the troopers from city and town motorcycle officers whose uniforms are sometimes similar.”

So when you see a cruiser with a red patch sticker on its back window over the next few months, that’s the reason. It is another way we are celebrating the roots of the MSP, much the same way Troopers are authorized to wear badges, through the end of this year, replicating those worn by the first State Patrolmen 100 years ago.” 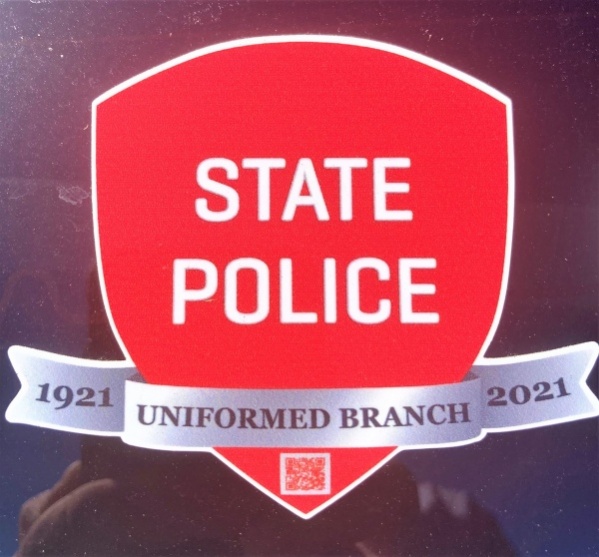