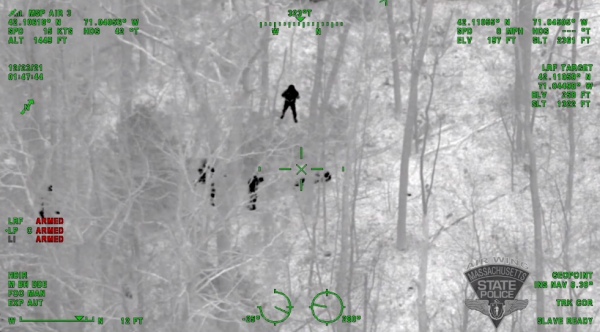 “At approximately 1 a.m. on Dec. 23, Air 3 of the Massachusetts State Police Air Wing, a helicopter crewed by Sgt. Gregg Spooner and Trooper Joshua Pacheco, was over Brockton when it received a Lojack hit for a stolen motor vehicle.

MSP Air 3 located the moving vehicle and directed Brockton Police and State Police patrols to its location. When a Brockton cruiser got behind the vehicle, the suspects fled at a high rate of speed, prompting a pursuit that spanned several communities, before the pursuit was terminated because of the safety threat posed to the public by the fleeing suspects.

But Air 3 continued to follow the vehicle and repeatedly updated grounds units of its changing location. Eventually, as the MSP flight crew observed from the night sky above, the suspects pulled up to the Chatham West Apartment complex in Brockton. Five suspects bailed out of the stolen vehicle and ran away onto DW Field Parkway and then into adjacent woods, as Air 3 continued to monitor their locations through its FLIR (Foward Looking InfraRed) thermal camera system and direct patrols toward them.

As seen in the video, as a result of the Air Wing’s overflight support, State Troopers and Brockton Officers were able to locate the suspects hiding in the woods and took them into custody. The incident underscored the valuable capabilities that our Air Wing, which operates out of air bases in Plymouth, Lawrence, and Westover, provides to MSP and our local police partners.