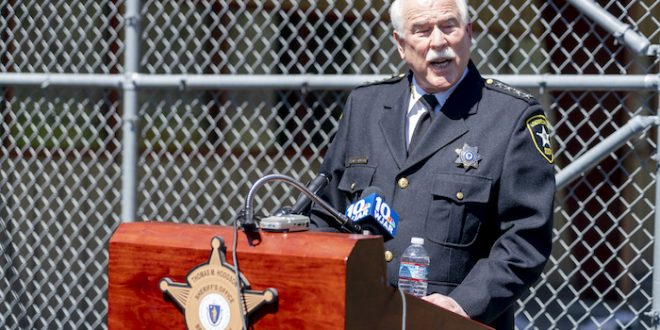 “Bristol County Sheriff Thomas M. Hodgson rallied about 130 Sheriffs from across the country in an effort to increase communication between the U.S. Department of Homeland Security and local law enforcement in communities from coast to coast.

In a recently sent letter to U.S. Sens. Ron Johnson, Rob Portman and Rick Scott, America’s Sheriffs urged them to introduce and pass federal legislation that would require DHS to notify local law enforcement if it will be placing illegal immigrants in their communities.

With the Biden Administration set to eliminate Title 42, experts have estimated hundreds of thousands of migrants will be crossing the border into the United States in the coming months.

“My home, my family and my heart are in Bristol County, Massachusetts, and I swore an oath to do everything I can to keep the people of Bristol County safe,” Sheriff Hodgson said. “As part of this oath, I joined about 130 of my fellow Sheriffs in urging increased communication on illegal immigrants being bused, flown and placed in neighborhoods across the country.

Sheriff Hodgson was invited to a roundtable discussion before these members of Congress last year on the topic of illegal immigration, and this letter served as a follow up to that discussion, which was carried on C-SPAN.” -Bristol County Sheriff’s Office.