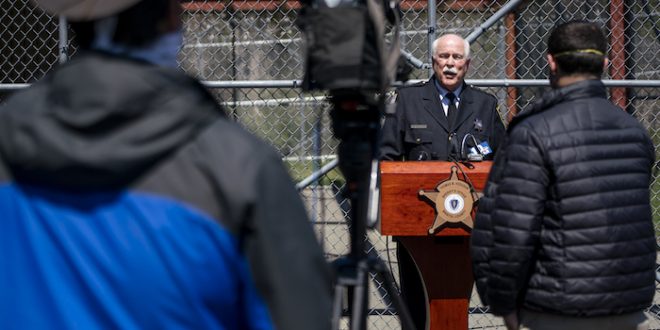 A Massachusetts Senate committee will investigate an incident at the Bristol County House of Correction, while Gov. Charlie Baker cautioned against “drawing conclusions” about the violent altercation.

The Senate Post Audit and Oversight Committee plans to examine the incident — which Bristol County Sheriff Thomas Hodgson alleged was an attack by detainees and which members of the congressional delegation alleged was violent retaliation by correction officers — that left three detainees hospitalized.

Senate leaders also signaled Tuesday that they want to know why Sen. Sonia Chang-Diaz was not permitted to enter the facility on Saturday despite state law granting lawmakers access.

In a joint statement, Senate President Karen Spilka and Post Audit and Oversight Committee Chair Sen. John Keenan of Quincy said their chamber is “extremely concerned” about the incident “in which the safety of both staff and detainees was endangered.”

Hodgson’s office said a group of 10 Immigration and Customs Enforcement detainees refused to be tested for COVID-10 despite showing symptoms, then “rushed violently” at the sheriff and damaged their unit.

They called for an outside investigation, as did several Beacon Hill lawmakers. U.S. Rep. Ayanna Pressley on Monday evening released her own statement calling for a probe of the incident.

Spilka and Keenan said the committee’s investigation will focus on both the incident itself and why a senator was not allowed to visit the House of Corrections in the aftermath. While the press release did not name the lawmaker, a Spilka spokeswoman confirmed it referred to Sen. Sonia Chang-Diaz.

On Saturday, Chang-Diaz tweeted a picture of the facility’s exterior and said she had been barred from entering, “even as reporters (were) waived in” for a press conference with the sheriff.

Massachusetts legislators do not require permission of correctional facility officials to conduct visits, according to state law.

The Friday night incident drew extensive media coverage. During his Monday press briefing, Gov. Baker, a Republican, said discussions about the topic were on his “to-do list” for later that day.

“What I would say is, there is a whole series of back-and-forths going on with respect to what happened there and people need to be careful about drawing conclusions one way or another,” Baker said.

The governor said his administration has faced situations and “a number of nursing homes” where individuals who officials would have expected to want COVID-19 tests rejected the practice.

Baker said he thinks people should “embrace testing,” especially those in essential jobs and front-line positions.

“We’ve had to discipline some people for not being tested in places where they should probably be tested,” he said. He declined to elaborate, describing it as a “personnel matter.”

“But the fact of the matter is, not everybody wants to be tested, even people who you would think would consider that to be an appropriate thing given their role and their responsibility,” Baker said.

Health precautions in prisons and jails have been a target of scrutiny during the pandemic, particularly in Bristol County. Civil rights and immigration groups sued Hodgson and ICE in late March, alleging that immigrants in civil detention at the facility were exposed to the highly infectious virus with no protections, sanitizer or disinfectant.

Hodgson sharply denied the allegations, describing the lawsuit through a spokesman as “a waste of the paper and ink it is printed on.”