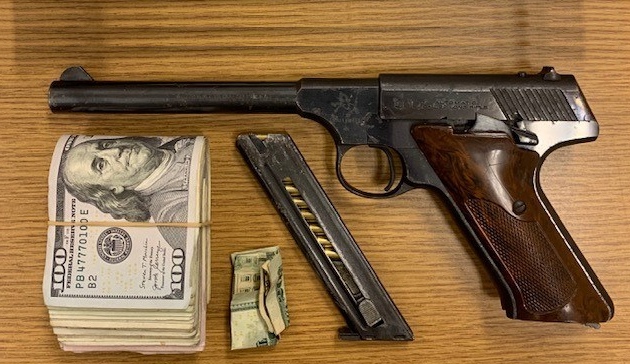 Troopers from the Massachusetts State Police Gang Unit, along with other Troopers and officers, on Tuesday afternoon arrested a known member of a Worcester gang for possession of heroin, and a short time later arrested one of his reputed gang associates and a young woman for unlawful possession of a firearm and ammunition.

Gang Unit Troopers, assisted by Troopers from the State Police-Leominster Barracks and Leominster officers, located STEPHON JONES, 33, of Fitchburg, inside the Whitney Field Mall in Leominster and arrested him on an outstanding assault warrant. Troopers found JONES to be in possession of a small quantity of heroin and more than $1,400 cash, suspected to be the proceeds of drug distribution, and also charged him with illegal possession of a Class A narcotic. JONES is a reputed member of the Providence Street Posse gang.

Troopers had previously observed another reputed Providence Street member, BENJAMIN ROSADO, 23, of Leominster, with JONES. A short time after JONES’ arrest, Troopers again observed ROSADO, this time standing outside the mall in a t-shirt despite the cold temperatures. LUCIA CARDOZO, 25, of Gardner, was observed holding ROSADO’s jacket and seemed to be trying to hide it. Following a threshold inquiry, Troopers searched the jacket and found a Colt pistol loaded with 10 rounds of ammunition. Neither ROSADO nor CARDOZO are licensed to carry a firearm, and both were arrested for illegal possession of the gun and ammunition.

The three in custody were transported to a barracks for booking.