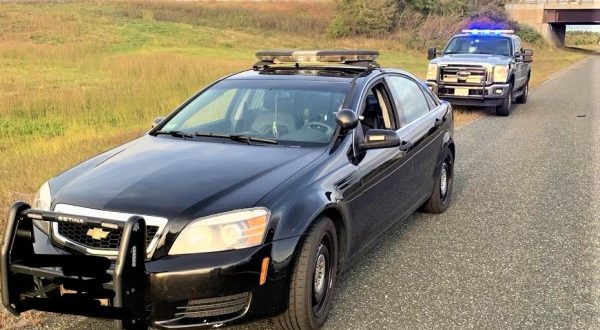 “While conducted speed and traffic enforcement during the evening commute Wednesday on Interstate 495 north in Raynham, Trooper Chris Kaszyk of the Massachusetts State Police Commercial Vehicle Enforcement Section came across this beauty. Trooper Kaszyk stopped the vehicle, a Chevrolet Caprice with a police light bar on its roof, after recording it on his radar going 96 mph. In addition to the excessive speed, Trooper Kaszyk was concerned that the vehicle appeared to be a police car and could be used by someone wanting to impersonate an officer.

Upon further investigation, Trooper Kasyzk determined that the electronics inside the vehicle had been removed, all power to the light bar was disconnected, and there were no switches inside the car to activate the lights. None of the lights had blue lenses, but were clear LEDs. The operator, a 57-year-old Mansfield man, stated that he purchased the vehicle at auction from a used car dealership. There was no evidence that he was trying to impersonate a police officer.

Trooper Kaszyk issued the driver a citation for speeding, which carried a $315 fine, and will notify Mansfield Police to make sure they are aware of the presence of the vehicle in their town.

Once again, a traffic stop proves you never know what you are going to see.” -Massachusetts State Police.