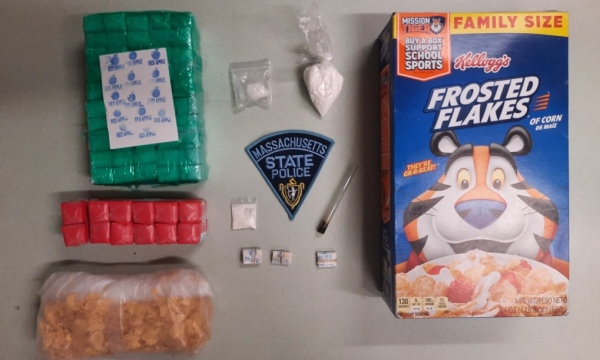 “On Friday, July 16, just before 12:30 a.m. Trooper Scott Boutell was working out of the Massachusetts State Police-Shelburne Falls Barracks. It was then that he observed a black Subaru Forrester with improper auxiliary lights illuminated, and an illegible handwritten temporary license plate.

Trooper Boutell then activated his blue lights and initiated a motor vehicle stop of the black Subaru. Trooper Boutell made contact with the driver of the vehicle and asked him for his license and the registration for the vehicle. The driver provided an expired Vermont license identifying him as JUSTIN BUTCHINO, 31, of Springfield Vt.

When questioned about the makeshift license plate, BUTCHINO could only offer unrelated documents, no title nor bill of sale, but insisted the vehicle was properly registered.

At this time Trooper Brian Vaidulas arrived on scene as backup. Trooper Boutell returned to the vehicle and asked BUTCHINO to step out so he could be placed under arrest. A search of BUTCHINO’s person revealed a bundle of heroin in his right pants pocket.

Trooper Boutell then removed GILLIAM from the vehicle. It was discovered that GILLIAM had a baggie in his left pants pocket that appeared to contain crystal methamphetamine. GILLIAM was then placed under arrest. As Troopers were attempting to place GILLIAM in the rear of a cruiser on scene, GILLIAM pulled away from Trooper Boutell and became argumentative. Trooper Boutell was able to calm GILLIAM and he remained compliant for the rest of their interaction.

A subsequent search of the black Subaru that BUTCHINO and GILLIAM were traveling in revealed a used syringe in the passenger door pocket, a box cutter, a purse containing two bundles of heroin, a small white baggie containing a substance consistent with fentanyl, a glass pipe, and a cereal box containing 3,100 bags of heroin and a plastic baggie of crack cocaine.

BUTCHINO was scheduled to appear in Greenfield District Court on the following charges:

GILLIAM was scheduled to appear in Greenfield District Court on charges of: