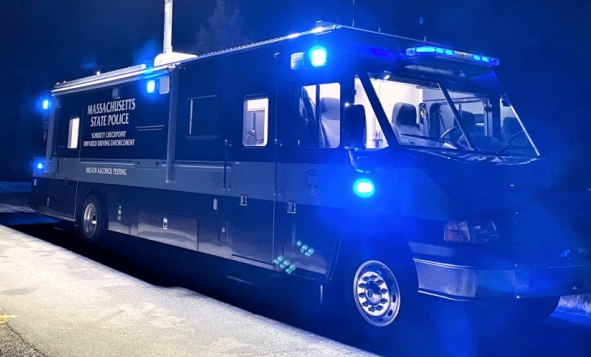 “We deployed extra patrols on New Year’s Eve to enhance safety on our roadways. Even though bars and restaurants closed early because of the ongoing pandemic curfew, we realized that there were still many opportunities for drivers to consume alcohol at private gatherings.

The extra patrols were deployed in all five geographic Troops during the night and made four arrests, issued criminal summons to three other motorists, and issued 137 citations for unsafe driving offenses, including 66 speeding tickets.

As seen in the photos, we stationed our two Breath Alcohol Testing Mobiles on busy roadways, one on Route 16 in Medford and Everett and the other on Route 290 in Northborough. As can often be the case, the night became eventful in other ways as well.

Patrols from Troops B and C (western and central Massachusetts) were diverted to Springfield before midnight to assist in the investigation into the shooting of our Trooper there, and patrols in Troop H (Metropolitan Boston) assisted in investigating a fatal motor vehicle crash.”

When Joe isn't writing, he's coaching people to punch each other in the face. He enjoys ancient cultures, dead and living languages, cooking, benching 999#s, and saving the elderly, babies and puppies from burning buildings. While he enjoys long walks on the beach, he will not be your alarm clock, because he's no ding-a-ling.
Previous Flag to honor Veteran Walter LaBerge of Swansea flies over Fort Taber
Next Mayor Mitchell announces reopening of regional surge care center in New Bedford for COVID-19