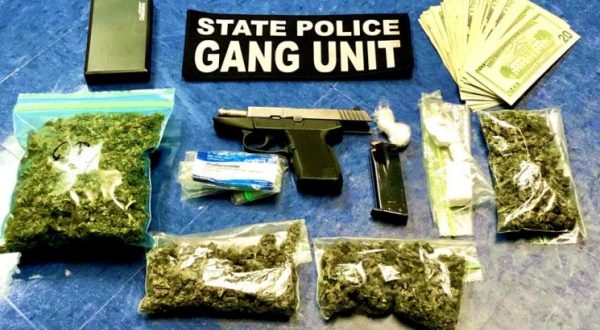 Troopers and Officers executed a search warrant at 64 Lionel Benoit Rd., Apt. B, in Springfieldbased on an MSP Gang Unit investigation into narcotics distribution from that address. The target of the investigation, TODD CRUZADO, 32, is an acquaintance of the apartment’s occupant.

In the kitchen Troopers and Officers located and seized hundreds of empty glassine baggies, each stamped with the numbers 413, consistent with materials used to package heroin. Also found in the kitchen was an electric grinder with suspected drug residue and $745 cash.

During a sniff of an Acura sport utility vehicle that CRUZADO had been observed driving, Springfield Police K9 Dex alerted to the scent of narcotics. During a subsequent search of the Acura, Troopers and Officers located approximately 80 glassine baggies stamped “Dunkin Donuts,” consistent in appearance and packaging to heroin, additional suspected marijuana, and a digital scale.

The investigation and an interview with CRUZADO established that the firearm and ammunition, narcotics, and paraphernalia belonged to him. CRUZADO was charged with the following offenses:

When Joe isn't writing, he's coaching people to punch each other in the face. He enjoys ancient cultures, dead and living languages, cooking, benching 999#s, and saving the elderly, babies and puppies from burning buildings. While he enjoys long walks on the beach, he will not be your alarm clock, because he's no ding-a-ling.
Previous New Bedford Public Schools on a 2-hour delay for Wednesday, December 11, 2019
Next Massachusetts State Police pick up and deliver more generous donations to Toys For Tots