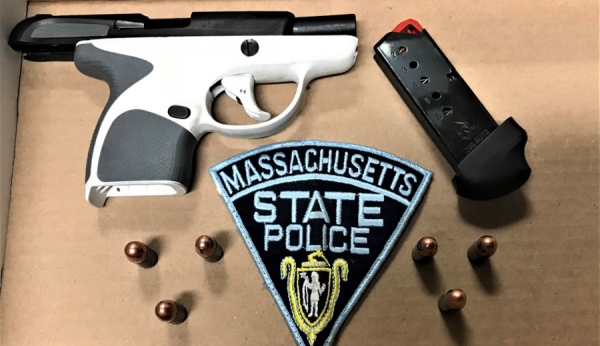 At approximately 3 a.m. today Trooper Edmond Gendreau, assigned to State Police-Milton, was on patrol traveling on Blue Hill Avenue in Boston. As he was approaching the intersection of Morton Street he observed a grey Toyota Corolla, without headlights or taillights active, fail to stop for a red traffic signal. He caught up to the vehicle and activated his emergency lights to initiate a traffic stop.

After Trooper Gendreau signaled the vehicle to pull over it continued on for an unusually long distance at a slow speed. As the vehicle finally stopped, Trooper Thomas Shruhan arrived to assist. Both Troopers then approached the vehicle and spoke with the operator and passenger, identified as JORDAN COLLINS, 22, of Cambridge.

After a thorough investigation on scene the Troopers built probable cause to search the vehicle and located an illegally possessed Taurus .380, loaded with a round in the chamber ready to fire. The firearm was in the immediate area of COLLINS, who does not possess a license to carry firearms.

COLLINS was placed under arrest and transported the Milton Barracks. The operator of the vehicle was issued a citation and permitted to leave the scene. A bail commissioner was contacted and set bail at $10,000 on COLLINS. He is expected to be arraigned at Dorchester District Court on the following charges: