On Feb. 22, Troopers Paul Dabene and Darius McPherson rescued a wayward swan that was walking on the westbound side of the busy Massachusetts Turnpike in Weston. They protected the swan until Weston Animal Control Officer Karen O’Reilly arrived on-scene.

ACO O’Reilly surmised that the young swan miscalculated his landing and ended up on the highway instead of the river below it. “Since swans need about 30 yards to take flight, and being a bit stunned, he was unable to get airborne with all of the traffic,” Weston Police wrote on their Facebook page. After checking him out, ACO O’Reilly released the swan back to the Charles River, where he happily found and joined his flock, which had congregated directly beneath the section of the highway where he had landed.”

Well, if one happy swan ending is good, two are better. And wouldn’t you know it, at the risk of being typecast as a Swan Whisperer, Trooper Dabene came to the rescue again.

This past Sunday, Trooper Dabene was patrolling the Pike when he responded to the westbound side in Newton, where another swan, seen here in both photos, had got into a bit of bind. Trooper Dabene and some Good Samaritans who stopped to help were able to herd the swan from a travel lane into the breakdown lane and kept the bird safe there until Weston Animal Control responded yet again.

Swan #2 was also released back to a more appropriate landing spot and he, too, is presumably back enjoying his daily paddling on the river, safe from the Turnpike traffic.

Great job by all involved! And if you see a swan in distress on a highway, call Trooper Dabene … (kidding, just call us at 911 and we’ll send the closest available Trooper). 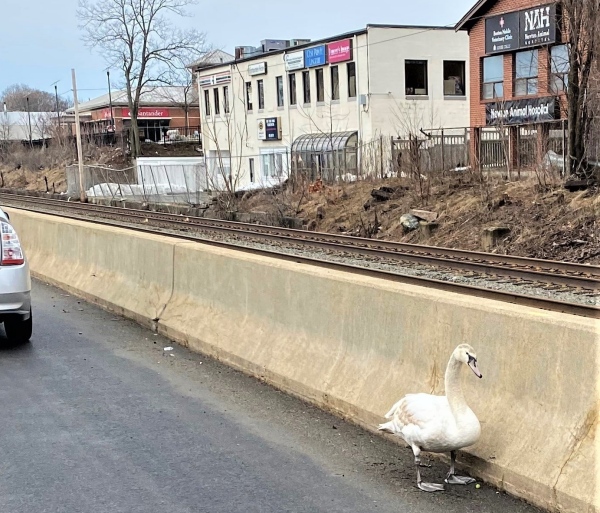