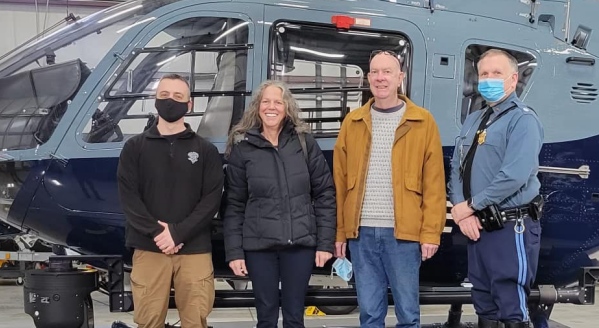 “Shortly before 9 p.m. on December 22, Troopers assigned to the State Police Air Wing scrambled in Air 3 to assist in the search for a missing hunter in a forest in Petersham. The helicopter’s flight crew was able to locate the missing individual by the light on his cell phone while he was deep in the woods.

The Troopers established contact with him by using the PA system installed on Air 3, then lit up the area with their “Midnight Sun” spotlight to lead ground units to the man’s location to complete the rescue.

Earlier today, the man, Herbert Moody, and his wife, Elizabeth Bassett, visited the Air Wing to express their gratitude.

“Thanks to all of you for being there, it went unbelievably smooth,” Mr. Moody said. His wife added that her husband’s rescue was the most wonderful Christmas gift the family could have received. The couple is seen in the photo with Lt. Kevin Kaupp (left), commander of the Air Wing, and Lieutenant Colonel Christopher Wilcox, commander of the Division of Homeland Security.” -Massachusetts State Police.

When Joe isn't writing, he's coaching people to punch each other in the face. He enjoys ancient cultures, dead and living languages, cooking, benching 999#s, and saving the elderly, babies and puppies from burning buildings. While he enjoys long walks on the beach, he will not be your alarm clock, because he's no ding-a-ling.
Previous Dominican national living in Massachusetts indicted on Fentanyl trafficking charges
Next New Bedford Fire Department respond to reports of fishing vessel on fire