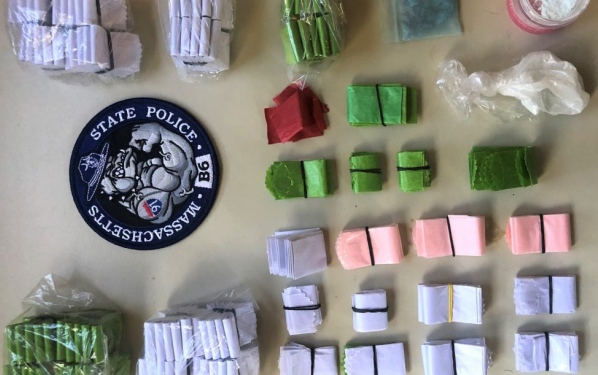 “At 12:20 a.m. on Friday, May 7, Trooper Tyler Hersom, assigned to the Massachusetts State Police-Northampton Barracks was on patrol on Route 91 in Whatley. While traveling northbound, Trooper Hersom’s attention was drawn to a blue Chevy Equinox veering in and out of its lane. It was then that Trooper Hersom turned on his blue lights and initiated a motor vehicle stop.

Trooper Hersom noticed the passenger moving around and repositioning her body as the vehicle slowed. Trooper Hersom then approached the vehicle and made contact with the operator, TOMMY NEWHALL, 37, of Chester Vt. When Trooper Hersom directed NEWHALL to produce his license and registration, NEWHALL ignored the repeated instructions. As the traffic stop continued, it was revealed that NEWHALL was not licensed to operate a motor vehicle. Around this time, Trooper Hersom was joined at the scene by Trooper Brendan O’Brien.

Trooper O’Brien identified the passenger as JENNIFER WEST, 36, of Claremont N.H. As the two Troopers explained that the vehicle would have to be towed from the scene because neither occupant was properly licensed, WEST continued moving her body and reaching for different items within the vehicle. It was during this time, Trooper O’Brien saw what he believed to be a baggie containing cocaine in WEST’s purse and watched her remove it and stuff it in between the front seats. The two Troopers had NEWHALL and WEST step out of the vehicle and Trooper O’Brien searched the purse where he had observed the narcotics. Inside the purse, Troopers found 20 bundles of Heroin. At this time WEST and NEWHALL were placed under arrest.

The Troopers on scene conducted a search of the vehicle and found bundles of Heroin in quantities ranging from 10-20 packets, bound with rubber bands. State Police K9 unit handler Gregory Valentine was called to the scene to have his partner conduct a sniff of the vehicle. The K9 alerted to several areas of the vehicle, and found an additional bundle of Heroin, a container filled with cocaine, and the original bag Trooper O’Brien had witnessed WEST attempting to hide stuffed in the center console. In total, 1,008 individual packets of Heroin, 7 grams of cocaine, and 1 gram of Xanax were secured. The Narcotics, NEWHALL and WEST were transported back to the Northampton Barracks for processing.

NEWHALL was scheduled to appear in Greenfield District Court on the following charges:

WEST was scheduled to appear in Greenfield District Court on the following charges: