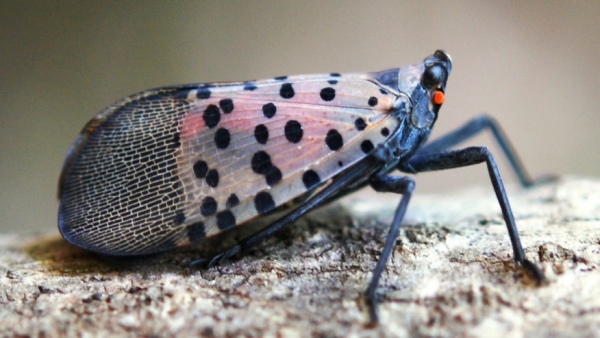 The Massachusetts Department of Agricultural Resources (MDAR) today announced that a single live nymph of the invasive spotted lanternfly (SLF) was found in the City of Fitchburg in late July 2021. Agricultural inspectors have surveyed and have not found any evidence that an infestation is present; however, inspectors will continue to survey and monitor the area. While MDAR has not been able to determine the origin of the insect, it could easily have been accidentally transported into the state on goods or vehicles traveling from one of several states currently under a lanternfly quarantine. Spotted lanternflies are excellent hitchhikers, and have been known to travel out of infested states in cars and other vehicles, on shipments of produce, sheds and gazebos, trees and shrubs for landscaping, and many other items being shipped from states with known infestations.

Due to this recent find, MDAR is urging the public to be on the lookout for this pest, particularly anyone who lives or works in the Fitchburg area. These bugs may be found congregating on sides of buildings, in or on vehicles, and on their preferred host plants: tree of heaven, grape, and walnut. Anyone who has recently received goods or materials from states where SLF is known to have been introduced (Connecticut, Delaware, Indiana, Maryland, New Jersey, New York, Ohio, Pennsylvania, Virginia, and West Virginia) should also be on the lookout.

“This most recent find is a good reminder to everyone that there is a significant risk that the spotted lanternfly will continue to accidentally be brought into Massachusetts from other states” said MDAR Commissioner John Lebeaux. “Early detection plays an important role in the protection of our state’s economic and ecological resources from invasive species. We ask anyone in the Fitchburg area to check for and report any signs of spotted lanternfly, and we remind everyone in Massachusetts to keep an eye out for this pest.”

If an individual suspects they’ve found a spotted lanternfly, please take a photo or collect the specimen, and report the sighting using MDAR’s online reporting form. Residents should look for both adult insects (large, gray bugs, about one inch long, with black spots and red underwings) and nymphs (younger nymphs are black with white dots, older nymphs are red with black and white spots). Spotted lanternfly (Lycorma delicatula, “SLF”) is an invasive sap-feeding insect from Asia that was first found in the United States in 2014, in the state of Pennsylvania. While the main host plant of this pest is tree-of-heaven (Ailanthus altissima), the spotted lanternfly attacks many different trees, shrubs, and vines, and has the potential to impact a broad range of agricultural commodities, including apples, peaches, grapes/wine, hops/beer, maple syrup, and ornamental plants.

While individual spotted lanternflies have been found in several different parts of the state over the past several years, surveys have found no evidence that SLF has become established in Massachusetts. These surveys continue both in the areas where the insects were found as well as in other areas thought to be at high risk for this pest. A current map showing towns and cities where SLF has been found can be downloaded from https://massnrc.org/pests/slf.