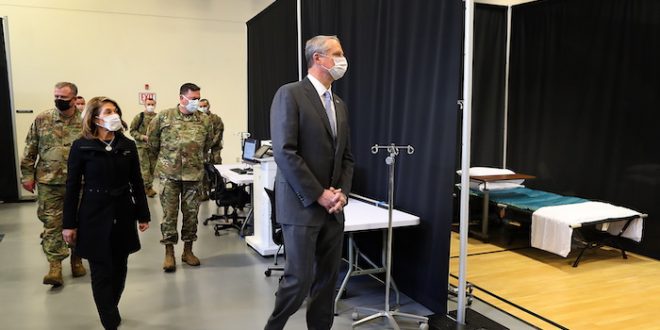 On the heels of the two deadliest days so far in Massachusetts, Gov. Charlie Baker said Sunday morning that “we’re right in the middle of the surge now” and a top White House official highlighted the state as an area where the continued spread of COVID-19 is a concern.

Massachusetts reported 156 deaths on Saturday and a single-day high of 159 fatalities on Friday, bringing the COVID-19 death toll here to 1,560 people. Nearly 2,000 new cases of infection reported Saturday brought the total number of cases in Massachusetts to 36,372 as the state continues to deal with an influx of cases.

“We’re still very much focused on Boston and across Massachusetts where the epidemic continues to spread across Massachusetts as well as in Boston, and we’re watching very closely Chicago,” White House coronavirus response coordinator Dr. Deborah Birx said on CBS’s Face the Nation. “And then we watch every single outbreak that occurs in different states around the Untied States including the most recent one in Ohio.”

Birx called the pandemic “a series of small epidemics across the United States,” but Boston was the first place she mentioned when asked where her concerns lie.

“The surge is in different places, in different states, at different times. We’re in a very different place here in Massachusetts than other states are,” Baker said during his own segment on Face the Nation. “We’re right in the middle of the surge now.”

Much of Baker’s Sunday morning remote interview with Margaret Brennan, though, focused on what might come after the surge and what needs to happen for Massachusetts and other states to resume more normal levels of economic and social activity, like a significant increase in testing for the highly-contagious virus.

Asked whether there needs to be a national strategy for testing, Baker said he appreciates that the federal government recognizes that different states are in different stages of dealing with the pandemic but that there is a role for federal involvement, “especially the ability to put the foot on the accelerator with respect to advancements in testing.”

“Everything associated with testing, ultimately has to be approved by the CDC and the FDA, as it should be,” he said. “The state shouldn’t be making their own decisions on that stuff.”

The U.S. Centers for Disease Control and the Food and Drug Administration also have an important role to play in working with companies to develop effective treatments for COVID-19 patients and, eventually, a vaccine.

“They approve and drive a lot of the policy and what ultimately becomes sort of the facts on the ground with respect to testing and treatments,” Baker said. “And in a state where there are a number of companies that are deeply invested in either the development of treatments or vaccines or have hospitals that are involved in clinical trials associated with treatments for COVID-19, the federal government’s role with respect to treatments is enormously important.”

Baker did not directly answer when asked if Massachusetts needs more federal funding as part of a relief package Congress has been discussing, but he talked about the ways in which the federal government would need to help states if the economy is to make a rebound.

“I think every state in the country is struggling with what the hit to their economy has done to their balance sheet and to their budgets. And if the feds are interested in sort of reopening the economy — and they’ve certainly talked a lot about the importance of stimulating the economy going forward — for states to be able to support that initiative, obviously it’s important for the feds to support our efforts to fund the stuff we do,” he said.

Massachusetts, like other states, is expecting a sizable revenue shortfall to materialize while demand and costs for public benefit programs are climbing. Last week, the bipartisan National Governors Association called on Congress to provide at least $500 billion specifically for states to address budget shortfalls caused by the pandemic.

“If we’re laying off tens of thousands of people at exactly the time when they want to reopen the economy, we’re going to be swimming against the current they’re trying to create,” Baker said.

Also on Face the Nation, former FDA commissioner Scott Gottlieb, who serves on Baker’s COVID-19 Advisory Board, said there may be a few drugs capable of treating COVID-19 in patients by this fall.

“We may have one or more treatments by the fall. I don’t think any one is going to be a home run, but we may have something that can help,” he said.

Though widespread availability of a COVID-19 vaccine is thought to be a year or more away, Gottlieb said Sunday that a vaccine might be ready for testing in America by this fall, and that it could be pressed into use if an area sees a second-wave outbreak of the viral infection.

“In terms of the vaccine here in the United States, we may have hundreds of thousands of doses available in the fall for testing and if there is an outbreak — a big outbreak in an American city — I think it would be made available in the city under some kind of protocol,” he said. “So we would have it available in the setting of an outbreak, certainly not a national epidemic like we have right now.”