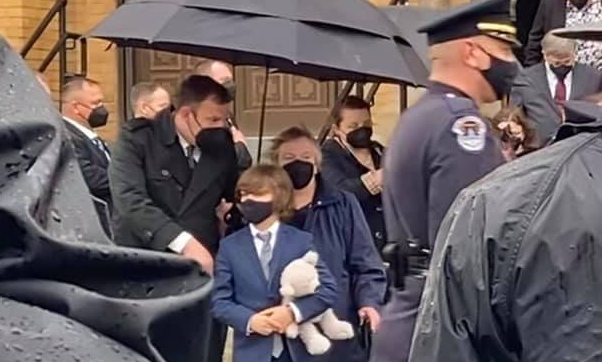 “The Berkshires sky took note of the sadness of this day, on which loved ones, colleagues, and law enforcement officers mourned the death of Capitol Police Officer William “Billy” Evans, who was murdered April 2 as he performed his duty protecting our Republic’s seat of government.

Cold rain pelted those gathered outside Saint Stanislaus Kostka Church and, later, in Bellevue Cemetery in Adams, in the far northwest corner of the Commonwealth, including members of the United States Capitol Police, well over a hundred Massachusetts State Troopers, and local officers. Officer Evans was a son of the hill towns, having grown up in neighboring North Adams, and he was remembered as a dedicated police officer and devoted family man.

And remembered, also, as hero, another protector taken in duty who now joins the long ranks of brave officers in Heaven who made the ultimate sacrifice before him. Here are some scenes from today.” -Massachusetts State Police.