Val Cabral of Norton called the Norton Police Department on Sunday, June 18th to report that she had caught a man urinating on the Pride flag she had recently installed on her property. This was within days after 100 small pride signs were distributed free to residents and businesses – dozens of which were stolen within hours and trashed, including two of Cabral’s signs.

Police were initially unsure if it was an act of hate, but now believe it was after further reviewing the surveillance footage.

Cabral said that after her two small pride signs were stolen she decided to install a large, wooden sign of a rainbow flag at the end of her driveway.

Within a day, her doorbell camera caught an unidentified man stopping in front of it and urinating on it. “I wanted to give him the benefit of the doubt and I initially thought that maybe he was just walking home and didn’t realize what he was doing, but he clearly moves, gets on his tip-toes to tries to get [urine] onto the sign itself.” said Cabral who sees the act as hateful and homophobic. 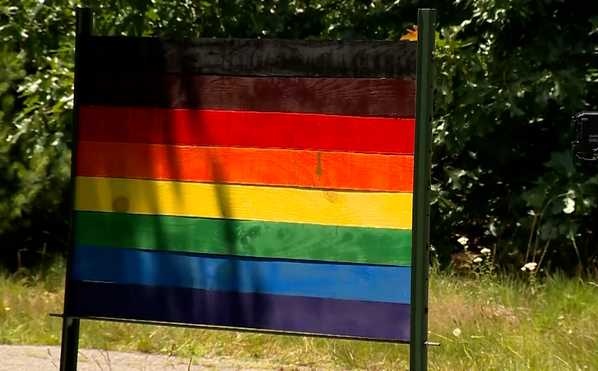