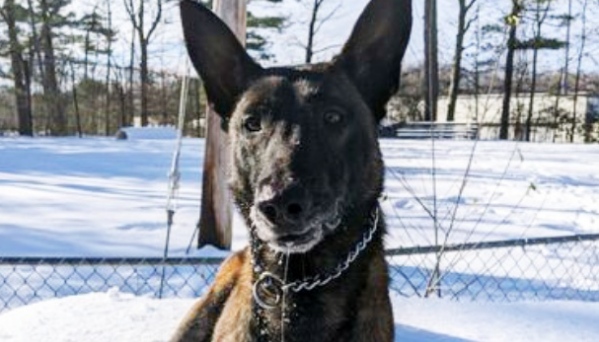 One of the newest Massachusetts State Police dogs, Binks, had a good night. The three-year-old Belgian Malinois and his handler, MSP K9 Trooper Daniel Purtell, along with MSP patrols, tracked down two men who fled a wanted motor vehicle that the suspects abandoned last night on the Massachusetts Turnpike after a pursuit.

The sequence of events began late Thursday night, when a Trooper from the State Police-Medford Barracks attempted to pull over a black 2012 Honda Accord with a Connecticut registration for a light violation on Route 99 southbound in Everett. The driver of the Accord failed to stop and fled on Route 99 toward Boston. The pursuit was terminated and a description of the wanted vehicle was broadcast.

At exactly midnight, State Police were notified by an off-duty police officer that he was behind the wanted black Accord westbound on the Turnpike in Weston. The Accord was occupied by two men, the off-duty officer stated. Troopers Darius McPherson, Kyle Panciera, and George Costa responded to the area and positioned themselves near the Weston Barracks. 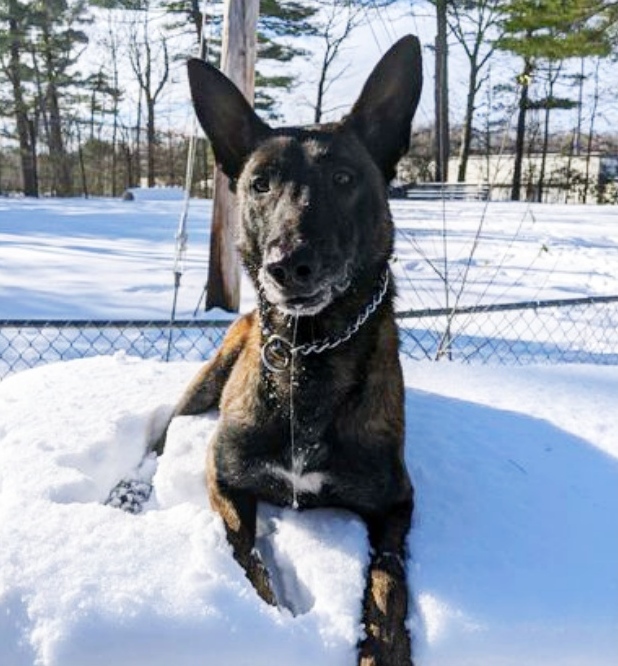 Troopers attempted to stop the Accord, whose driver failed to stop and continued to flee westbound, travelling across multiple lanes at speeds that reached as high as 110 mph. Several miles down the road, Trooper Hetu deployed the stop sticks and the Accord hit them and continued to travel westbound on damaged tires. Moments later, the Accord came to a stop in the breakdown lane in the town of Westborough.

Trooper Purtell from the K9 Unit was the first to reach the Accord, and observed a man jumping over the guardrail and fleeing into the woods. Trooper Purtell deployed Binks (a recent graduate of the MSP’s K9 certification school), who acquired a scent and began tracking down a steep incline into the woods, where a set of footprints was visible in the snow.

Binks tracked down to a deer fence, where he showed a proximity alert and began to jump and whine at the fence, and stood on his hinds legs peering deeper into the woods. Trooper Purtell called out the suspect, heard him respond from a distance, and was able to persuade him to surrender. The suspect, who was the driver and was identified as ARTHUR HARRIOTT, 19, of Windsor, Ct., was taken into custody by Troopers.

Then Binks pulled away from that location, moving to his left and whining, and began tracking again. Trooper Purtell observed a second set of footprints in the snow. Joined by Trooper Costa, the K9 team tracked through deep snow and thick woods until they encountered a stream. Binks tracked down the stream bed and moments later the Troopers picked up the footprints again about 15 feet away.

Binks continued tracking toward a home, down the driveway, and out to Fox Lane in Westborough. He tracked up the road. Three houses up Binks took a right down another home’s driveway, tracking between a truck and a sedan. Once through the vehicles Binks spun back and stood on his hind legs again.

Trooper Purtell lit up the vehicles and observed a man lying down trying to conceal himself in the sedan. Troopers called out the suspect, who surrendered and was taken into custody and was identified as NICKOLAS BURBA, 21, of Manchester, Ct. MSP K9 Trooper John Doherty and his partner Duke also responded to the scene to assist and completed a visual search around the vehicles and inside the sedan.

Troopers transported both suspects to State Police-Weston to be booked.

ARTHUR HARRIOTT was charged with the following offenses:

NICKOLAS BURBA was charged with breaking and entering into a vehicle.

Binks, pictured, completed certification last year and has been on the road for two weeks. He is dual-certified in patrol and human remains detection.