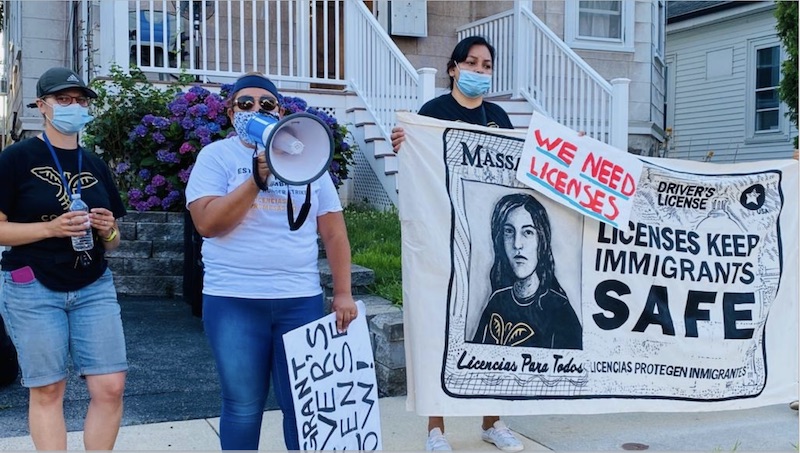 Fifty-nine of Rep. Christine Barber’s colleagues in the House co-sponsored her idea to use an economic development bill as a vehicle to authorize driver’s license access for undocumented immigrants.

Activists with the Movimiento Cosecha group protest near the home of House Speaker Robert DeLeo on Tuesday morning in support of legislation making driver’s licenses available to undocumented immigrants. [Courtesy/Movimiento Cosecha] It was apparently not enough.

Barber pulled the proposed amendment, which would have spliced the text of her standalone legislation into a wide-reaching jobs and housing bill (H 4879), as debate got underway on the package Monday.

“We’ve done everything that we can these last two years, from a pilgrimage, from two encampments to a sit-in and a hunger strike,” said Amelia Pinal, a member of the Movimiento Cosecha group that led the Tuesday protests. “We’ve literally sacrificed our bodies in the heat, in the rain and with hunger so that we can express to this community, to the legislators, to the public, how truly necessary licenses are.”

While Barber and supporters said they are hopeful a similar amendment or the standalone bill could succeed in the Senate, the withdrawal in the House likely means the proposal will be unable to overcome opposition in that branch this session, with only three days left for formal sessions this year.

The standalone bill is sitting in the Senate Ways and Means Committee, and Sen. Brendan Crighton filed an amendment to the Senate’s version of the economic development bill set for debate later this week.

Barber proposed the same language as the bill (S 2641) as amendments to both a policing reform bill and an economic development bill only to withdraw both before debate. She said that it became clear the measure did not have the votes it needed.

“With the emotions around the police bill last week and a full agenda this week, it became very clear that we didn’t have support for this amendment,” Barber, a Somerville Democrat, told the News Service on Monday. “We decided to withdraw the amendment to fight another day and keep the work going and keep building momentum.”

Roughly 20 people attended each of the two protests, said organizers with Movimiento Cosecha.

While they did not interact with DeLeo directly, a smaller group spoke with Spilka, who “didn’t give us any commitments” and told supporters that the proposal’s fate would be “up to the other senators,” according to Rolando Oliva, one of the activists who helped organize the events.

“I feel frustrated and angry that she never gave us a commitment,” Oliva said in Spanish, which Pinal translated. “People deserve better. She’s not working just for some, and she can’t avoid others. This is a right that we deserve.”

Spilka has previously voiced support for the proposal, saying in a September radio interview that “there’s like 14 other states that have done this and the sky hasn’t fallen.” However, she has not indicated whether she plans to bring it forward for a vote.

Asked for comment on the protests, a DeLeo spokesman replied simply that the underlying bill “remains under consideration by the Legislature.”

Opponents of the bill from the Massachusetts Coalition for Immigration Reform say its passage would make it easier for undocumented immigrants to live in Massachusetts and for “unscrupulous employers” to hire them, exploit them and pay them lower wages. The group opposes illegal immigration, alleging negative impacts on crime, health care, crowded schools and the use of government-funded social services.

Gov. Charlie Baker opposes the measure, so legislative leaders would need to ensure they have a two-thirds majority ready to override a potential veto. The governor said in February he thinks “the bar on this one’s pretty high,” flagging concerns with security and confirming identities.

Barber criticized the demonstrations outside legislative leaders’ homes, calling them a “terrible idea by a fringe group.”

“We believe that there should be a clear boundary to protect everyone’s personal space, including that of elected officials and most especially, their families,” Barber and fellow sponsor Rep. Tricia Farley-Bouvier said in a joint Tuesday statement. “We advised, we admonished them, to keep any and all actions at the State House and we are upset that they did not listen to reason.”

The bill, referred to by backers as the Work and Family Mobility Act, would allow undocumented immigrants residing in Massachusetts to acquire standard, but not federal REAL ID-compliant, licenses, something state law currently bans them from doing.

Close to 200,000 undocumented immigrants live in Massachusetts, of which 41,000 to 78,000 would qualify and likely apply for licenses within three years of the bill’s implementation, according to an analysis from the left-leaning Massachusetts Budget and Policy Center.

Barber’s decision to pull the amendment came after consultation with other legislative sponsors and with advocacy groups that back the effort. Although they understood the circumstances, activists said they were “disappointed” with the outcome.

“If it’s not now, when?” Natalicia Tracy, a co-chair of the Driving Families Forward Coalition said in an interview. “Massachusetts needs to take a stand on supporting immigrants’ rights right now. We’re not going to quit. This is not optional for us. This is something we have to do.”

Supporters of the bill, who count the Massachusetts Major City Chiefs of Police Association among their ranks, have been pushing for its passage since the start of the lawmaking session, and in previous sessions, arguing for it in economic, safety and moral terms.

The surge of new licensing could bring in $6 million in licensing and vehicle fees, according to MassBudget, and proponents say ensuring immigrants undergo proper training and testing before getting behind the wheel will keep all drivers safer.

Driving without a license may be a necessity for those who need to get to work, but could generate interactions with police that lead down the road toward deportation, said SEIU 32BJ Political Director Dalida Rocha.

“We talk about what happened at the border as if it doesn’t happen here, but I don’t think people are understanding that we’re funneling families into the deportation pipeline and separation because of driver’s licenses,” Rocha, another Driving Families Forward Coalition co-chair, said.

Advocacy for the bill had been vocal well before Tuesday’s protests. For the past 12 days, Movimiento Cosecha members camped outside the State House in a show of support. In February, activists embarked on a hunger strike outside the State House to call for its passage, and the Transportation Committee shortly thereafter voted 14-4 along party lines to advance the bill.