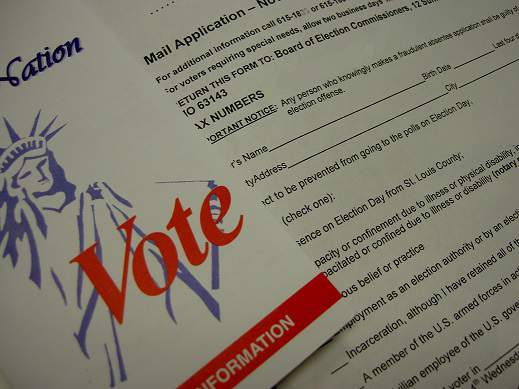 The justices of the Massachusetts Supreme Judicial Court “discern no merit” to the arguments that Republican Party officials made earlier this summer in a rejected attempt to block parts of the state’s new vote-by-mail and early voting law, the court said in an explanation of its ruling Tuesday.

Republican Party Chairman James Lyons and a handful of Republican candidates or party officials filed a lawsuit in June seeking to overturn the so-called VOTES Act, which made voting-by-mail and early voting permanent in Massachusetts. The plaintiffs argued before the SJC in early July that the law, which codified pandemic-era policies that proved popular with voters, violated the allowances for absentee voting contained in Article 105 of the state Constitution and that Secretary of State William Galvin should have been blocked from sending mail-in ballot applications out.

The court quickly ruled in favor of Galvin on all claims on July 11 but said time pressures meant that a detailed reasoning for its decision to allow mail-in voting to proceed would have to follow in due time. As of Friday, about 250,000 people had requested, filled out and returned mail-in ballots for the Sept. 6 state primaries, Galvin’s office said.

Lyons and the GOP pointed to part of the Massachusetts Constitution that explicitly allows for absentee voting for three reasons — when a voter is going to be out of town for Election Day, has a disability, or has a religious-based conflict with Election Day — and argued that those were the only allowable reasons a voter should vote by mail. The lawsuit argued that, except for those three absentee voting allowances, the Legislature does not have the authority to provide any form of voting other than in-person on the day of a primary or election.

“We disagree,” Justice Scott Kafker wrote for the court in a 61-page opinion released Tuesday. “Voting is a fundamental right, and nothing in art. 45, as amended by art. 105, or in other parts of the Constitution cited by the plaintiffs, prohibits the Legislature, which has plenary constitutional powers, including broad powers to regulate the process of elections and even broader powers with respect to primaries, from enhancing voting opportunities. This is particularly true with respect to the universal early voting provisions in the VOTES act, which, in stark contrast to the narrow and discrete absentee-voting provisions of art. 45, enhance voting opportunities equally for all voters.”

Kafker wrote that the seven justices of the SJC, each of whom was appointed by Republican Gov. Charlie Baker, “discern no merit” to the other claims in the MassGOP lawsuit.

A spokesman for the Republican Party did not respond Tuesday when given an opportunity for the party or chairman to weigh in on the SJC’s rationale. The party did not respond to a question about the status of the U.S. Supreme Court appeal that Lyons said in July he would undertake to “provide relief to prevent a constitutional travesty.”

During oral arguments in July, the VOTES Act’s extension of the existing electioneering buffer zone requirements for Election Day polling places to early voting locations during voting hours was one area of the MassGOP’s complaint that justices zoomed in on.

Michael Walsh, a Lynnfield attorney representing Lyons and the plaintiffs, wrote in his brief that the electioneering ban is “no longer a narrowly-tailored impingement upon free speech” and that it “restricts all manner of access to the government” if a city or town hall hosts early voting and is therefore covered by the buffer law.

Kafker took note of the expansion of the times when the 150-foot buffer zones are in effect and what that could mean for the expression of rights by citizens when government buildings are functioning as early voting locations.

“I’m just trying to understand,” he said in July. “So we’ve got these smaller towns in Massachusetts where town hall is, basically, the single public forum … and it’s going to be shut down for two weeks or so.”

In the written ruling released Tuesday, Kafker notes that towns with fewer than 5,000 registered voters are required to hold only four additional hours of early voting, to be held on weekends. He said that covers one-third of Massachusetts municipalities.

“Although the act’s sliding scale requires longer hours for larger municipalities — up to two full weeks of voting in the Commonwealth’s largest cities — those are communities that provide many other public forums for campaigning,” Kafker wrote. Quoting a previous case as precedent, he added, “Doubtlessly a significantly more expansive combination of time and space restriction would constitute an impermissible restraint on speech, but here we are confident that the VOTES act’s application of [the electioneering ban] remains ‘on the constitutional side of the line.’ ”