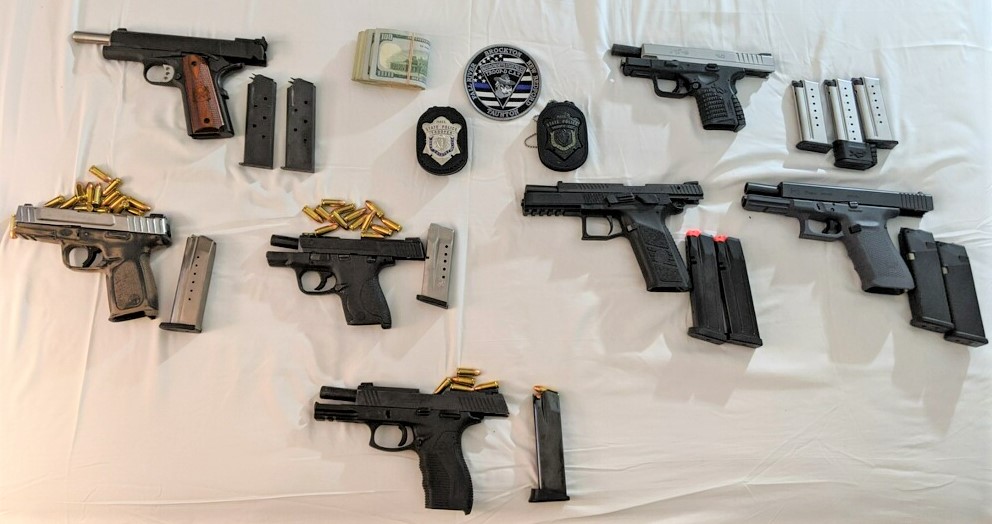 At 6:39 p.m. last night, Troopers Matthew Kelley and Michael Pacheco, assigned to the Massachusetts State Police Troop D Community Action Team, stopped a motor vehicle outside the Quality Inn in Raynham for a violation of the hands-free law. Subsequent investigation revealed that the driver of the rental car, DONALD E. ASHCRAFT, 37, of Clio, Mich., did not have an active driver’s license, and the Troopers placed him under arrest.

As Trooper Kelley was escorting ASHCRAFT from the rented 2020 Hyundai Elantra, Trooper Pacheco observed a single round of ammunition under where the driver had been sitting. Upon further investigation, the Troopers determined that the passenger, CRAIG C. BAIER, 39, of Bradenton, Fla., was also in possession of ammunition. During subsequent conversation with ASHCRAFT, he admitted there was a firearm in the glovebox. Troopers then searched the glovebox and located a loaded, semi-automatic Taurus 9mm handgun with a 17-round feeding device containing 12 rounds. Troopers located several additional 9mm rounds in BAIER’s pocket and, in the driver’s side door, two pills believed to be Adderall, six pills believed to be Xanax, and a suboxone strip.

A short time later Troopers from the Massachusetts State Police Gang Unit responded to the motel, which is located at 164 New State Highway in Raynham, to assist with further investigation of ASHCRAFT and BAIER. After being advised of his rights, ASHCRAFT freely consented to allow Troopers to search his rented motel room, Room 101. ASHCRAFT, in whose name the room was rented, also acknowledged that there were more firearms in the room, that he and BAIER had transported the firearms to Massachusetts from Florida to sell them, and that neither of them had a license to carry or Firearms Identification Card in Massachusetts.

Troopers searched Room 101 and recovered the following firearms and ammunition:

Troopers from the State Police Crime Scene Services Section and State Police Ballistics Unit responded to the motel to assist in processing and securing the evidence.

Troopers transported the men to State Police-Middleboro, where they booked each of them for unlawful carrying of a firearm and multiple counts each of possession of a large capacity weapon or feeding device; possession of a firearm without a Firearm Identification Card; and improper storage of a firearm. ASHCRAFT, who was driving the car, additionally was charged with violation of the hands-free law, unlicensed operation, and possession of Class B and E narcotics.

A bail clerk set bail for both men at $50,000 cash each. They were held overnight and were expected to be arraigned in Taunton District Court today.