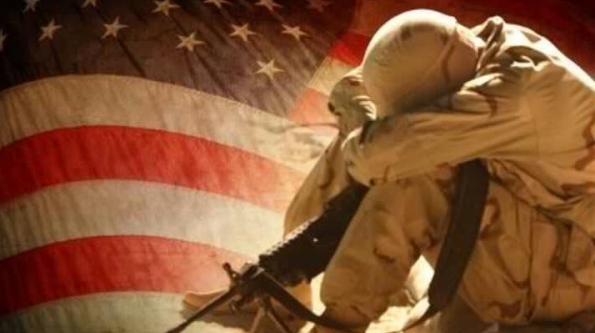 Presented to Families, Medal Would Recognize PTSD and Other Service-Related Injuries and Illnesses.

The Baker-Polito Administration this week re-filed legislation to establish the Massachusetts Medal of Fidelity, which will be presented by the Massachusetts National Guard to the families of veterans who lost their lives to service-related illnesses and injuries.

“The Medal of Fidelity is an important opportunity to honor the brave men and women and their families who have served not just the Commonwealth, but the nation,” said Governor Charlie Baker. “Service-related injuries and illnesses can persist long past service, and our administration is proud to offer legislation that, if passed, will demonstrate our gratitude for the sacrifices of our veterans and their loved ones.”

The bill, entitled “An Act Relative to Establishing the Massachusetts Medal of Fidelity,” will authorize the Commonwealth to award the Medal of Fidelity to the next-of-kin of Massachusetts service members who “died as the result of service-connected diseases, conditions or injuries that are related to either exposure to harmful toxins, herbicides, agents, and materials or service-related post-traumatic stress disorder.”

“As we celebrate Memorial Day this weekend, there is no more appropriate time to recommit our administration to our veterans and their service,” said Lt. Governor Karyn Polito. “Service-related illness and injuries can have devastating impacts on veterans and their families, and these selfless sacrifices should not go unnoticed and unacknowledged.”

Complementing the Medal of Liberty, which is presented to the families of Massachusetts veterans who die of combat-related physical injuries, the Medal of Fidelity will recognize service-connected injuries related to exposure to harmful substances, such as Agent Orange, as well as death attributed to service-related mental illness.

“We remain committed to honoring the Massachusetts veterans whose military service was inextricably linked with sacrifice,” said Secretary of Public Safety and Security Tom Turco. “The Medal of Fidelity will memorialize the call to duty that they answered so bravely, recognize the loss that their loved ones still mourn, and properly reflect our understanding that the invisible injuries of war are very real for military families.”

“Those who have selflessly served in the military can endure trauma long beyond their active duty and while some service related health issues, such as PTSD and traumatic brain injury, which affect individual veterans and their loved ones, may be less obvious, they are equally important,” said Health and Human Services Secretary Marylou Sudders. “The Commonwealth recognizes invisible wounds of war with this new honor.”

“The brave men and women who serve in the military suffer visible and invisible trauma. Massachusetts is a leader in providing benefits and services to veterans, and helping veterans access mental health and other services,” said Secretary of Veterans’ Services Cheryl Lussier Poppe. “We can never express enough gratitude for those who have served, but we can take every opportunity to honor and pay our respects to those who give so much to us, and their families.”

“This is the first medal of its kind given by the Commonwealth to recognize veterans who have lost their lives because of service-connected illness and injuries,” said Maj. Gen. Gary W. Keefe, The Adjutant General of the Massachusetts National Guard. “It represents the duty and commitment of service members, as well as their faithfulness to the nation. The medal also demonstrates the Commonwealth’s commitment to support them and their families before, during, and after military service.”

The bill will also authorize a commission to make Medal of Fidelity award recommendations to the Governor. The commission will be composed of The Adjutant General of the Massachusetts National Guard and two field grade officers of the armed forces of the Commonwealth.