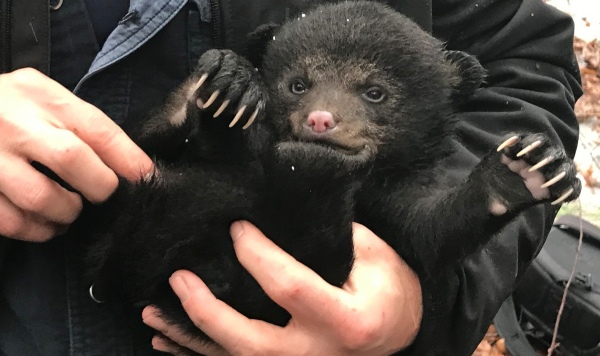 “Our biologists visited 27 black bear dens this winter to place radio tracking collars on adult female bears and collect important data. We learn a lot about bear activity from reviewing location data from radio collars, as well as their size documented during den visits.

🔸 Bears spend more time in neighborhoods when supplemental food like birdseed and unsecured garbage is available.
🔸 Bears in suburban areas are larger than bears in rural, forested areas.
🔸 Bears are increasingly denning near homes and businesses. 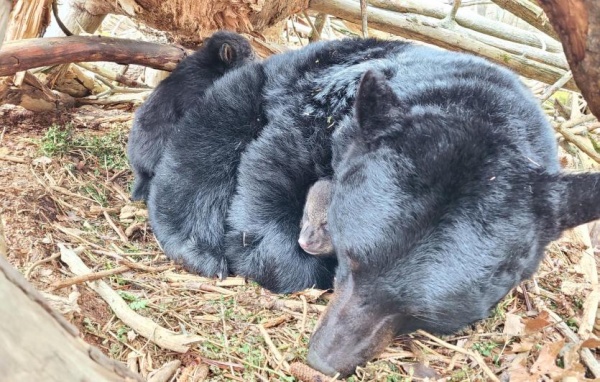 Every winter, MassWildlife biologists visit the dens of female black bears, known as sows, who have been previously fitted with radio tracking collars. Sows may be in their dens alone, with newborn cubs, or with yearling cubs born the previous winter. Biologists assess the condition of the bears, count the newborn cubs, and confirm the survival of the yearlings born the previous winter. These valuable data on survival and reproduction help biologists model whether black bear populations are growing, declining, or remaining stable.

Winter dens can be a hollow tree or log, rock crevice, or a ground nest under fallen trees or brush. Once they locate a den, biologists immobilize the sow and gather information such as body condition, weight, and sex of cubs. They also evaluate collars for proper fit and function and replace them when needed. This past winter, biologists visited 27 dens. Discoveries included one sow with no cubs, four two-year-old females wearing yearling collars, 10 females with yearlings, and 11 females with newborn cubs. Sows ranged in age from two to 16 years old.

Black bear cubs are born small, blind, and helpless. To give the mother a chance to bond with her cubs and for the cubs grow, MassWildlife waits until the end of February before visiting dens of sows with newborns. The eleven females averaged 2.54 cubs, with one sow having 4 cubs.

MassWildlife Black Bear and Furbearer Biologist Dave Wattles noted that biologists can learn a lot about bear activity from reviewing location data collected from radio collars, as well as their size documented during den visits. “One key finding is that the female bears we study in more suburban areas are very large, with weights averaging more than 250 pounds,” he shared, “compared to bears in more rural, forested areas averaging closer to 150 pounds.”

A second big takeaway from this winter’s research was how close to people bears will den. Wattles added, “We had bear dens 10 yards off the back parking lot of a fire department, under a building on piling foundations, on the edge of a backyard, and in the middle of a construction yard. These bears had plenty of options to den in more remote locations but chose not to.” Both observations indicate bears are finding supplemental food sources in suburban areas, such as unsecured garbage, bird feeders, and open compost. Human food sources are harmful to bears’ natural diets and put communities at added risk of unwanted conflicts.

As bear population densities continue to increase in central Massachusetts, and ranges continue to expand east of I-495, it is more important than ever for people to use best practices to coexist. You can help keep bears healthy (and keep people safe) by removing bird feeders, securing all garbage and compost, feeding pets indoors, and protecting backyard bees and chickens with electric fencing. When bears do NOT find easier-access food sources near people’s neighborhoods, they learn to spend less time in these places, which reduces risks for people and bears.