Massachusetts fire departments reported more than 900 fires related to illegal fireworks between 2012 and 2021, officials said. In addition to the 43 fire service injuries and $2.1 million in damages attributed to these fires, Massachusetts medical facilities reported 31 severe burn injuries extending to 5% or more of the victims’ bodies that were caused by illegal fireworks.

“People are injured and property is lost to illegal fireworks every single year in Massachusetts,” State Fire Marshal Ostroskey said. “As we enter the period when most of these incidents occur, we’re reminding everyone that fireworks are illegal because they are dangerous. Many cities and towns will have professional fireworks displays this year, so play it safe and leave fireworks to the professionals.”

“The possession, use, and sale of fireworks are illegal in Massachusetts without certification and licensing,” said Colonel Mason. “Massachusetts law requires the confiscation of any illegal fireworks we encounter, even if legally purchased elsewhere. State Police and our local partners will be conducting targeted enforcement efforts to intercept illegal fireworks coming into the state and we will seize any that we find in routine traffic stops.” 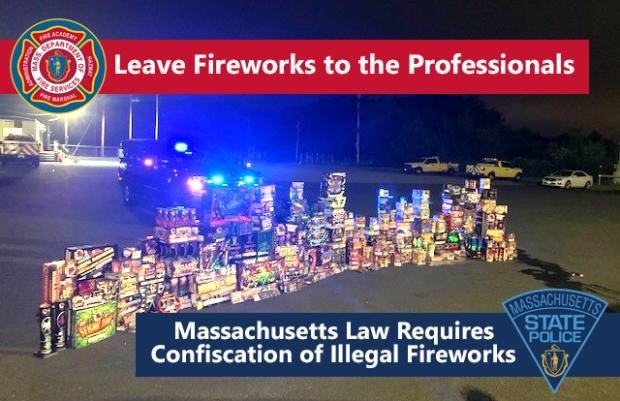 Officials emphasized that fireworks, including sparklers, are especially unsafe around children. Sparklers burn at temperatures of over 1,800° Fahrenheit – hotter than the melting point of glass and aluminum. According to a 2021 report from the U.S. Consumer Product Safety Commission, “there were an estimated 1,600 emergency department-treated injuries associated with firecrackers and 900 with sparklers” in 2020. This accounted for almost 10% of all fireworks-related injuries that year. Of those 900 injuries from sparklers, 44% were to children under the age of 5.

Fireworks fires peaked in Massachusetts during the summer of 2020, with 120 incidents reported to the Massachusetts Fire Incident Reporting System that year. They declined by 67% to 40 incidents in 2021 as many cities and towns resumed their public fireworks displays and police departments increased enforcement. State Police seized more than 47,000 units of illegal fireworks and issued 65 criminal summonses during last year’s enforcement operations. Those operations will resume this summer, officials said.

The Department of Fire Services posts a list of permitted municipal fireworks displays and updates it each week through the summer. To view the list – and to learn more about the dangers of illegal fireworks – visit the DFS website.” Massachusetts State Police.