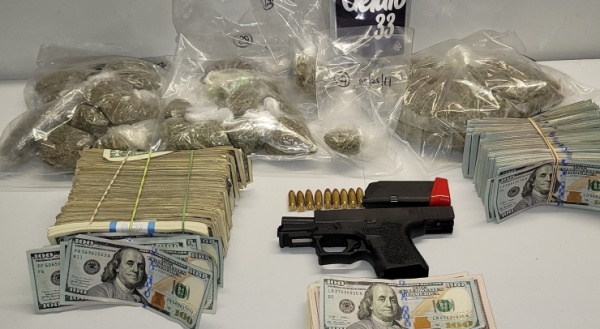 On Friday, November 20, 2020, members of the District B-2 Drug Unit (Roxbury), the Citywide Drug Unit along with the MetroWest Drug Task Force, conducted a drug investigation and executed a search warrant in the area of 50 Savin Street, Roxbury. As a result of the search warrant, officers recovered a black 9mm firearm, which was loaded with (9) live rounds of ammunition, over 1 pound of packaged marijuana, US Currency, and drug packaging materials.

As a result of the drug investigation, Edward Molina, 40 years old, of Dorchester, was arrested and charged with Distribution of Class B Drug (Oxycodone), and Distribution of Class B Drug Subsequent Offense (Oxycodone). Following the search warrant, Molina was additionally charged with Unlawful Possession of a Firearm, Unlawful Possession of Ammunition, Armed in the Commission of a Felony, Possession with Intent to Distribute Class D (Marijuana), and Improper Storage of a Firearm.

Edward Molina was also found to have an active default warrant issued out of Worcester Superior Court charging him with Trafficking Heroin.

The suspect is expected to be arraigned in Roxbury District Court.