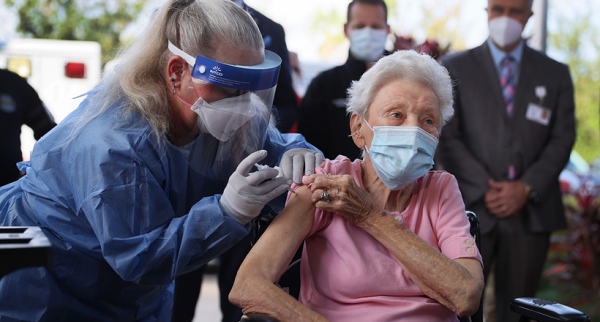 The equivalent of the population of Methuen — roughly 51,000 people — got their second dose of a COVID-19 vaccine between Friday’s report from the Department of Public Health and Sunday’s update. There are 550,000 people fully vaccinated against the coronavirus, Gov. Charlie Baker said Monday morning, compared to 550,302 total confirmed COVID-19 infections since the start of the pandemic.

With more than 1.2 million residents having received at least one vaccine dose, Massachusetts is again beginning to reopen its economy more widely and a third vaccine approved by federal officials over the weekend could help alleviate some of the tensions that come with the limited supply of doses.

The U.S. Food and Drug Administration issued an emergency use authorization Saturday for the one-shot Johnson & Johnson vaccine, which was developed in part by a group at Beth Israel Deaconess Medical Center in Boston. It joins the Moderna and Pfizer two-dose vaccines in the public health arsenal and states are expected to receive an initial batch of the doses this week.

“Our healthcare leaders and clinicians see the authorization of the Johnson & Johnson vaccine as a significant step forward in the effort to vaccinate residents of the commonwealth,” Valerie Fleishman, senior vice president and chief innovation officer at the Massachusetts Health & Hospital Association, said. “This vaccine has been shown to be highly effective in protecting against COVID-19-related hospitalizations and deaths, and those who receive it should have every confidence that they are protected against serious illness due to COVID-19 and its variants.”

Johnson & Johnson is expected to deliver about 20 million doses of its single-shot COVID-19 vaccine to the federal government for distribution by the end of March. The New York Times reported Monday morning that Biden administration officials speaking on background said that the company will deliver 3.9 million shots this week but none next week.

Baker said last week the combination of Johnson & Johnson’s vaccine getting approval and the plans Pfizer and Moderna have to increase their production “could be a really big moment.”

On Monday, Baker said the new vaccine “will certainly dramatically boost” the state’s vaccination efforts and “should mean a big increase” in the amount of vaccine available.

On Feb. 24, Baker estimated it would take about a month, barring an increase in vaccine supply, to get through the roughly 1 million people who at that time were becoming newly eligible to receive vaccines, including the large group of residents in the age 65 and older group.

As of Monday morning, Massachusetts moved back to Step 2 of Phase III of the administration’s reopening plan, which means that occupancy limits broadly increase to 50 percent for most businesses and indoor performance venues and indoor recreational activities can reopen. Restaurants no longer have a percent-based capacity restriction but must adhere to six-foot social distancing, limits of six people per table and 90-minute limits.

U.S. Centers for Disease Control and Prevention Director Dr. Rochelle Walensky, who was the head of Massachusetts General Hospital’s infectious disease division before being tapped for her federal role, was specifically asked about Baker’s newest rules for restaurants Friday and said her agency “would really encourage people and states to not expand and release restrictions.”

“Given the trends that we’ve seen in just the last couple of days, I would say, you know, we can’t be in a place where we’re lifting restrictions right now,” she said, according to a transcript provided by the White House. “If we level off at the level of 70,000 cases a day, we are just at the level where — where we had the peak before — or base before we have the fall peak.”