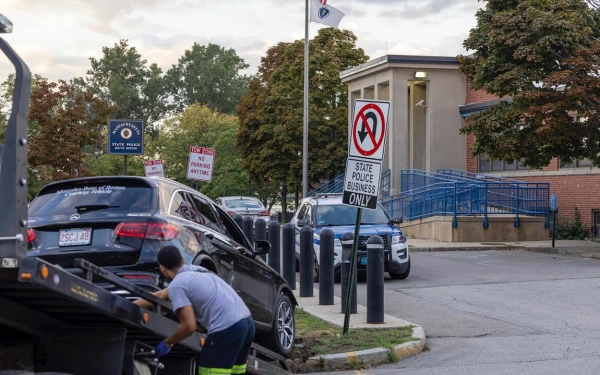 “On Monday, August 22nd, a male and a female busted into the lobby of the SP South Boston barracks after crashing their Mercedes SUV into the vehicle barricades in front of the barracks.

The victims frantically reported two suspects had held them at gunpoint in their vehicle. They intentionally crashed into the barricades then the suspects fled on foot into Moakley Park, where witnesses observed one discard a firearm into a trash barrel and then fled towards the Harbor Point area.

A State Trooper witnessed the crash and immediately chased the suspects on foot before losing them. A massive search of the area was conducted with multiple MSP assets, as well as assistance from Boston Police Department and UMass Police. One suspect was located in the lobby of the DoubleTree hotels on MT Vernon Street and was taken into custody without incident.

The Troopers recovered a loaded 9mm Glock in the trash barrel of the Moakley Park Stadium and secured it. The suspect has been arraigned in South Boston District Court.” -State Police Association of Massachusetts.