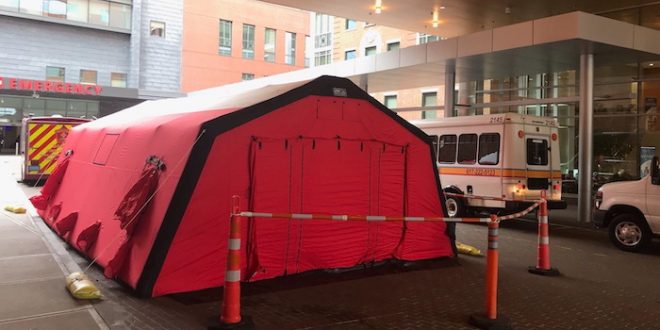 "A tent has been set up in the Shapiro driveway to prepare for potential scenarios related to #COVID19 as the situation rapidly evolves," Boston Medical Center posted Wednesday morning on Twitter. "While the tent is currently only being used for drills, it could be used as a testing location or additional ED space should we need it." [Boston Medical Center/Twitter]

More than 1,000 Massachusetts residents have been subjected to quarantine since the start of a coronavirus outbreak in the state, about 60 percent of whom have completed monitoring.

The latest numbers from the state released Wednesday showed 445 individuals are under quarantine or undergoing monitoring for the COVID-19 illness, while another 638 finished that process and are no longer in quarantine.

Since last week, the last time public health officials released quarantine numbers, the total number of Bay Staters who are in or have completed quarantine increased about 300. Over that same span, the amount of confirmed COVID-19 cases ballooned from just one to 92.

A daily update on cases is expected around 4 p.m. Wednesday.

Gov. Charlie Baker declared a state of emergency on Tuesday and imposed limits on state employee travel as the state began shifting its approach to focus on mitigation. The governor encouraged employers to let employees work remotely, if possible.

Public Health Commissioner Monica Bharel said the state is “at a critical point in this outbreak,” particularly because some of the seven cases in Berkshire County could not be traced back to international travel or to an isolated and known source of transmission.

On Wednesday morning, Bharel received new authority to take prompt actions as necessary during the state’s response to the virus.

Following a vote from the Public Health Council, Bharel will have the sole authority to order isolation or quarantine for patients in coronavirus cases, which under statute normally requires action from her in conjunction with the council. Local boards of health can also issue similar orders.

The council also voted unanimously Wednesday to give Bharel broader authority to take prompt action in response to any unforeseen developments as part of the public health emergency.

“Our goal is to prevent the spread in our communities and reduce the number of people infected,” Bharel said.

The emergency declaration, she said, “prepares us for the potential of what’s to come.”

All but one of the state’s 92 COVID-19 cases are presumptive positive, meaning they have not yet been confirmed by the CDC. Public health officials said 70 cases trace back to a late February executive meeting that Biogen held in Boston.

Council members raised concerns at the meeting about the impact on health care workers and on municipalities. Dr. Edward Bernstein, a professor of emergency medicine at Boston University, asked about plans to limit exposure for hospital workers and other providers as well as patients.

Bharel replied that the state would offer frequent communication across the health care system, and she said the state received confirmation Tuesday that it will receive additional personal protective equipment from a national stockpile to supplement “dwindling supplies.”

“In Berkshire County, we’re working with them so their health care workers and their patients can be prioritized to be tested there,” Bharel said, noting that Centers for Disease Control guidelines currently allow the tests only for patients displaying symptoms.

Responding to a question from Upton Town Manager Derek Brindisi about municipal access to protective equipment and hand sanitizer, Bharel said materials the state will receive from the national stockpile are ‘for all individuals who need it appropriately.”

The state expanded its testing capacity from 50 patients per day to 200 and recently received another 2,000 testing kits, each of which can handle multiple patients. However, only the State Public Health Laboratory can conduct tests, and other hospitals or commercial laboratories cannot due so until they get approval from federal authorities.

Bharel said it will be “very helpful” for other labs to gain that ability as council members noted the importance of further increasing testing capacity.

“It doesn’t seem that 2,000 tests is going to meet the exponential curve we’re seeing in other states,” Bernstein said.