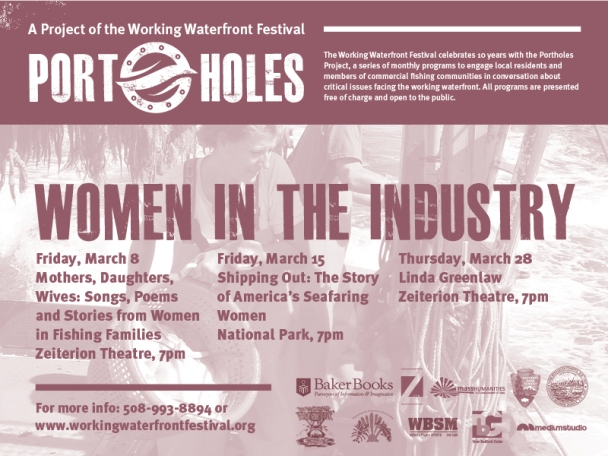 During the month of March, the Working Waterfront Festival’s Portholes Project is pleased to present three programs which explore the theme Women in the Industry. We are pleased to present these programs in conjunction with the Zeiterion Theatre’s Women’s Voices Series. All programs are presented free of charge and open to the public. 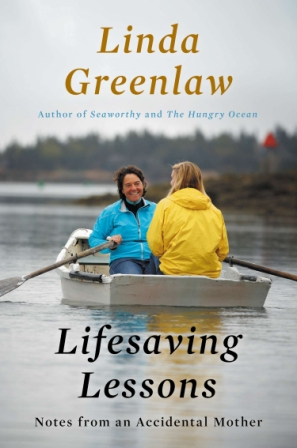 Friday, March 15 – National Park, 7PM
Shipping Out: The Story of America’s Seafaring Women
Filmed on board merchant ships in coastal waters from Alaska to New York, Shipping Out looks at the little known history of women and seafaring in America. Featured in the program are women who hold jobs in commercial shipping. We meet them working as engineers, bar pilots, tug boat captains, mates and deckhands. The film was produced by Maria Brooks whose award winning documentaries have been seen on Public Television. A discussion with several women who work in the local fishing industry will take place following the film.

Thursday, March 28 – Zeiterion Performing Arts Center, 7PM
Linda Greenlaw
Famed swordfisherman and bestselling author Linda Greenlaw survived the perfect storm and lived to tell the tale, but when faced with the prospect of raising a deeply troubled teenager at the age of 40 plus, Greenlaw finds herself in more turbulent waters than she could have ever imagined. Greenlaw will read from and sign her latest book LIFESAVING LESSONS: Notes from an Accidental Mother.