All photographs by Josh Souza.

Everybody knows that dog is man’s best friend, but for a select number of deputies at the Bristol County Sheriff’s Office, dogs serve as partners on the frontlines of law enforcement.

It was a cold December day outside the Bristol County House of Corrections in North Dartmouth, but that didn’t deter the dedicated K-9 deputies and their partners from demonstrating the work they have been trained to do. From apprehending bad guys to finding hidden drugs, these dogs are a force to be reckoned with.

The Sheriff’s Office currently has six dogs in its K-9 unit, five patrol dogs, either German Shepherds or Belgian Malinois, and one used exclusively for finding cellphones within the jails, a black Lab. Of the five used for patrol, four are cross-trained to perform general patrol duties as well as locating narcotics. 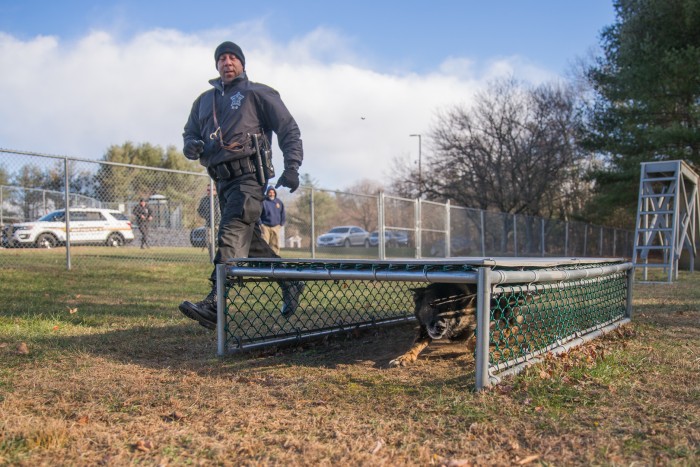 Dogs undergo 16 weeks of training before hitting the field for a year. After the first year they return to the academy for an additional eight to ten weeks of narcotics training.

The training at Bristol County is not the same as you would find in many other departments. During the 16-week academy, the dogs are taught a balance of drive and skill.

“There’s no perfect dog,” said Colonel Robert Sylvia, head of the Sheriff’s Office’s Law Enforcement Division. “You have to train them the best you can.”

For the first few weeks, the dogs will be on a leash, or what’s referred to a lead by the deputies. What’s uncommon about this academy is the canine will spend most of their time training “off-lead,” or without a leash. This practice takes a little longer to train, but pay dividends when the dog and his handler are in the field.

By not having to restrain their dog at all times, the deputy is free to perform searches of the suspect while his canine remains on guard in case the suspect decides to flee. While the dog is pursuing the suspect, the handler has the ability to call them off with one simple command. Lieutenant Paul Douglas said this is a very valuable skill for the dogs as it allows for more control over the situation and can avoid excessive use of force.

Joining the K-9 Unit takes a special combination of passions for animals as well as law enforcement. Lt. Douglas has been serving the Sheriff’s Office for 18 years, 11 of which have been in the K-9 Unit. He said he’s always been passionate about animals and that it’s both rewarding and amazing to see what these canine can do.

“It’s amazing how they can just ‘turn it off,’” Lt. Douglas said of how the dogs can separate their jobs from the rest of their lives, just like humans in law enforcement. 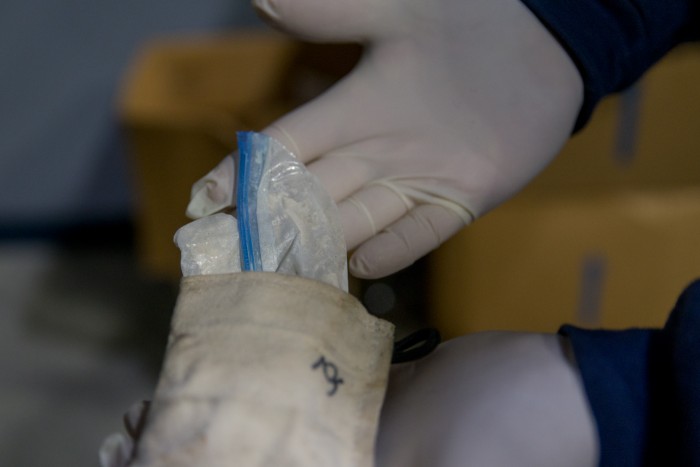 Lt. Douglas added that when he brings out his partner, K-9 Rony, to a scene, it automatically commands respect of everyone around, especially the suspects.

During the demonstration, K-9 Rony quickly located a hidden stash of 4g of Percocet. Once it’s located, he scratches and barks at the location to alert Lt. Douglas. His other dog, K-9 Storm, is used to locate cellphones within cell blocks in the jails by sniffing out the phone’s battery.

Deputy Joao Santos’ partner, K-9 Bob, has only been in the academy for two weeks, though is already beginning to look like a pro. Santos has been with the Sheriff’s Office for four years and on the K-9 Unit for the past year. Santos comes from a family with deep roots in law enforcement in Cape Verde as well as dog lovers. His former dog was retired due to health complications, but Santos said there’s still a strong bond between the two.

“I always thought it was brilliant for a human to train a dog like that,” Santos said. “There’s a special bond because they really are your partner. It’s hard to explain but it’s there.”

Col. Sylvia echoed the strength of that bond, saying he’s had former dogs that he served with cremated because, “they’re coming with me.”

The relationship between dog and handler is so strong in part because both are always by each other’s side. Beginning on the first day of the academy, the dog becomes a part of the deputy’s family. Dogs typically last around 10 years in the K-9 unit until they are retired. At that point, the deputy will keep ownership of the dog while also taking on a new canine.

The Bristol County Sheriff’s Office continues to be a premier training location for local municipalities and their K-9 divisions, as Fall River is currently training two dogs that will graduate the program on December 23rd, including a bomb detecting dog. The Fall River Police will soon have the only canine with this capability on the Southcoast aside from the Massachusetts State Police, meaning a shorter response time if need be.