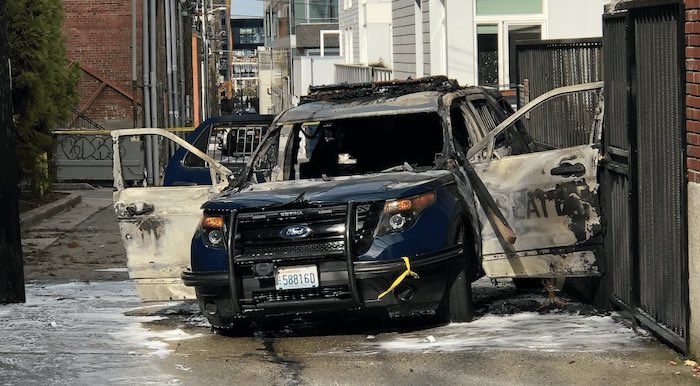 Around 1:30 PM on Thursday, a Seattle police officer was in their patrol vehicle in an alley between Dexter Avenue and John Street looking for a man who was reportedly brandishing a flaming piece of lumber. The officer found the man, who threw the flaming lumber—believed to be a 2×2—into the patrol vehicle while the officer was still inside.

Additional responding officers chased the man into a parking garage where they deployed a taser and took him into custody. One officer is believed to have discharged a firearm during the incident. The suspect was not struck.

Additionally, as officers were arresting the man, the flames from the burning lumber engulfed the entire patrol vehicle. One officer was transported to Harborview Medical Center with non-life-threatening burns.

Morale is low and according to a Washington news organization, at least 118 Seattle police officers have separated from the Seatle police department – 39 officers left in September. Typically, six officers leave the force on a monthly average. There are now 1,200 officers in service in Seattle – the lowest number in a decade.