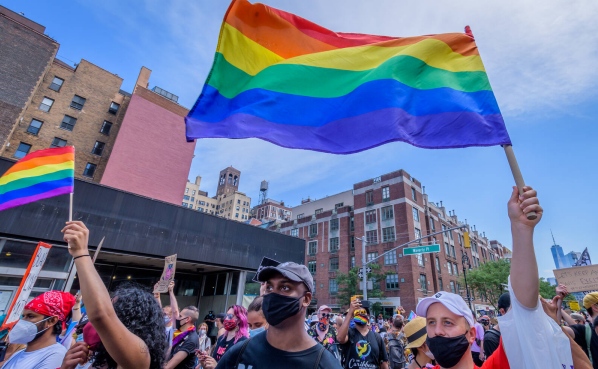 A California man has been indicted by a federal grand jury in connection with making threats to commit anti-LGBTQ violence against Springfield-based Merriam-Webster, Inc. and others.

Jeremy David Hanson, 34, of Rossmoor, Calif., was indicted on one count of interstate communication of threatening communications to commit violence. The grand jury also charged Hanson with intentionally selecting Merriam-Webster, Inc., its property and its employees as the object of the threatening communications pertaining to one’s actual or perceived gender, gender identity, or sexual orientation. Hanson will appear in federal court in Springfield on May 13, 2022. On April 20, 2022, Hanson was arrested and charged by criminal complaint.

“We believe Mr. Hanson, motivated by hate and veiled by the assumed anonymity of the internet, made numerous threats of violence to instill fear in our communities,” said United States Attorney Rachael S. Rollins. “Hateful and bigoted activity, like the conduct alleged here, is destructive on so many levels and will not be tolerated. Every individual has a right to feel safe in their community. My office will continue its relentless pursuit of those who seek to threaten, intimidate and divide us and hold them accountable.”

“Jeremy Hanson is accused of repeatedly making violent threats, motivated by hate, to intimidate others – even going as far as causing Merriam-Webster to shut down its offices for five days out of fear for their employees’ safety,” said Joseph R. Bonavolonta, Special Agent in Charge of the FBI Boston Division. “Threatening violent action strikes at the heart of our fundamental right as Americans to live and work without fear, and this case underscores the FBI’s commitment to ensuring that everyone’s civil rights are protected, and those who try to infringe on them are brought to justice.”

According to the charging documents, between Oct. 2 and Oct. 8, 2021, Springfield-based Merriam-Webster, Inc. received various threatening messages and comments demonstrating bias against specific gender identities submitted through its website’s “Contact Us” page and in the comments section on its webpages that corresponded to the word entries for “Girl” and “Woman.” Authorities later identified the user as Hanson.

Specifically, it is alleged that on Oct. 2, 2021, Hanson used the handle “@anonYmous” to post the following comment on the dictionary’s website definition of “female”: “It is absolutely sickening that Merriam-Webster now tells blatant lies and promotes anti-science propaganda. There is no such thing as ‘gender identity.’ The imbecile who wrote this entry should be hunted down and shot.”

Hanson also allegedly sent the following threatening message via the website’s “Contact Us” page: “You [sic] headquarters should be shot up and bombed. It is sickening that you have caved to the cultural Marxist, anti-science tranny [sic] agenda and altered the definition of ‘female’ as part of the Left’s efforts to corrupt and degrade the English language and deny reality. You evil Marxists should all be killed. It would be poetic justice to have someone storm your offices and shoot up the place, leaving none of you commies alive.”

It is further alleged that on Oct. 8, 2021, Hanson posted another threatening comment on the dictionary’s website and a threatening message via the “Contact Us” page that read: “I am going to shoot up and bomb your offices for lying and creating fake definitions in order to pander to the tranny mafia. Boys aren’t girls, and girls aren’t boys. The only good Marxist is a dead Marxist. I will assassinate your top editor. You sickening, vile tranny freaks.” As a result of the threats, Merriam-Webster closed its offices in Springfield and New York City for approximately five business days.

Individuals or entities who believe they may be victims of this alleged crime should contact the U.S. Attorney’s Office at (888) 221-6023.

The charge of interstate transmission of threatening communications provides for a sentence of up to five years in prison, three years of supervised release and a fine of $250,000. Sentences are imposed by a federal district court judge based upon the U.S. Sentencing Guidelines and statutes which govern the determination of a sentence in a criminal case.