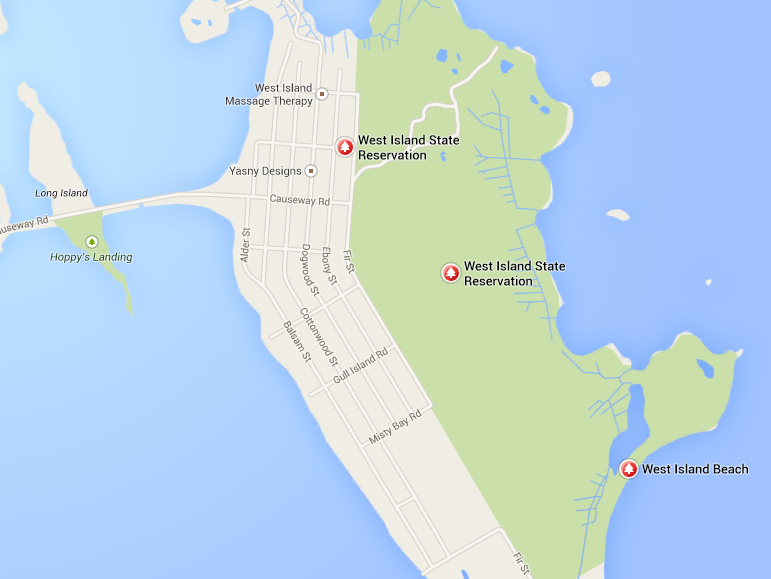 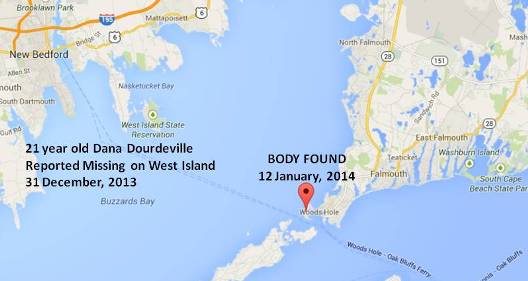 The body of 21 year old Dana Dourdeville washed up on the shoreline of East Falmouth Sunday afternoon around 2pm. He was found by a volunteer civilian search party between the Cape Cod Canal and Woodshole, in Falmouth in the area of Penzance Point. There was no evidence of trauma however, an autopsy will be conducted by the Massachusetts State Medical Examiner.

More searching was conducted for 21 year old Dana Dourdeville, the missing duck hunter from Marion. The Southeastern Massachusetts Law Enforcement Council Underwater Recovery Unit and Dive Team launched two boat searches from Hoppy’s Landing on West Island in Fairhaven. The searches were conducted Wednesday morning, which was the ninth day of this incident.

The first launch left the dock just after 10am and steamed out to the scallop farm off the northeast coast of West Island. The boat crew used a drop video, which is an underwater camera that is towed with a tether behind the vessel which provides a live video feed to a monitor onboard the boat. The crew kept a constant watch of the monitor, looking for any signs of Mr. Dourdeville.

After reaching the scallop farm, the search team turned back to the northeast shore of West Island, proceeding south back towards the area of the town beach. The shallow waters were checked along the way. The video monitor experienced technical difficulties and had to be swapped out with a different one. Once the monitor was replaced, a second crew boarded the vessel and conducted another search of the area.

Extensive searching has been conducted from the air, on the water and on land in the attempt to locate Mr. Dourdeville. Searchers have utilized aircraft, boats, all terrain vehicles, K9 units, and thermal and night vision technology to help with their efforts. So far the only item found has been a kayak that was located adrift approximately 2 ½ miles offshore. With the exception of a pair of gloves inside the kayak, no other items have been found.

The Southeastern Massachusetts Law Enforcement Council is a collaborative of over 21 local police agencies that provide mutual aid services to participating agencies in the event of any natural or manmade incidents that would require resources beyond the capacity of the any one police agency. The Underwater Search and Recovery Unit conducts underwater searches from shorelines and boats. Its primary mission is the recovery of people, property and evidence from beneath the surface of the water.

There are no further developments in the search for Dana Dourdeville, the missing 21 year old man from Marion. The Massachusetts Environmental Police are the lead investigating agency, being assisted by the Fairhaven Police Department. Fairhaven officers are continuing to check the eastern shoreline of Fairhaven on foot. All searches were suspended late last week due to the winter storm that struck the area.

A meeting is scheduled this week with the Southeastern Massachusetts Law Enforcement Council Underwater Search and Recovery Team to discuss underwater search options. There are hundreds of square miles to search in the area of Buzzards Bay where Mr. Dourdeville’s kayak was found adrift. In addition to the vast ocean area involved in this operation, cold water temperatures, frigid wind and poor weather have greatly added to the challenges of the search.

Public safety agencies launched a full-blown air, sea and land search last week, utilizing helicopters, boats and all terrain vehicles. Unfortunately Mr. Dourdeville was not found, even with the use of thermal imaging and night vision technology. The investigation is active and ongoing. Information will continue to be released to keep the public informed.

A limited search for Dana Dourdeville, who was reported missing on New Year’s Eve resumed this morning.  The search is being conducted by the Massachusetts Environmental Police offshore of WestIsland.  The Fairhaven Police Department is continuing its investigation into the young man’s disappearance.  So far the only item recovered during the search has been Mr. Dourdeville’s kayak, which was located by a U.S. Coast Guard helicopter drifting approximately 2 ½ miles east of West Island.

The kayak belonging to the hunter, who has been identified as 21 year old Dana Dourdeville, was found floating in the water off the east shore of West Island. The U.S. Coast Guard located the vessel floating approximately 3 miles offshore between West Island and Falmouth. Inside the vessel was a single glove. The glove was dry and it did not appear as though the kayak had flipped at any point in time. Unfortunately, the kayak was not occupied when it was located just before 11pm Tuesday night.

The search resumed this morning after sunrise and has been joined by the Southeastern Massachusetts Law Enforcement Council Search and Rescue Team. Searchers are using aircraft, boats and all terrain vehicles to assist in their efforts. A land search is also being conducted on foot.

Fairhaven Police are searching for a 21 year old male who left his Marion home at approximately 2pm Tuesday afternoon. He was reportedly going duck hunting and brought along his kayak. After he failed to return home, his mother went looking for him. She found his vehicle parked in the lot of the West Island town beach just before 7pm. There was no sign of the male party or the kayak.

The kayak is described as a red 9 foot kayak. The missing man is a 21 year old thin white male, approximately 5 feet 10 inches tall, with brown hair. He was reported to have been wearing brown sweatpants and a red life jacket.

The Fairhaven Police Department is currently working with assistance from the Fairhaven Fire Department, the Fairhaven Harbormaster, the Massachusetts State Police Air Branch, the New Bedford Police Marine Unit and the U.S. Coast Guard. At this point, the scope of the search includes the east side of West Island, the Little Bay area as well as the surrounding conservation land.