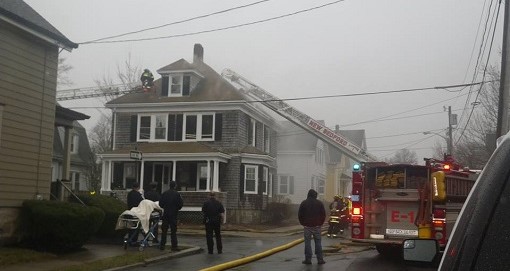 District Attorney Sam Sutter announced today that a suspect connected to the April 15th death of Justin Downey in New Bedford has been apprehended in Stone Mountain, Georgia.

Sayeed Coggins, 36, of Providence, RI, was arrested during the overnight hours Tuesday into Wednesday by U.S. Marshalls. The Marshalls and other law enforcement personnel had been searching for Mr. Coggins after investigators here in Bristol County filed a warrant for his arrest late last week.

Mr. Coggins is charged in Massachusetts with being an accessory to murder-after the fact. The charge is connected to the suspicious fire at 55 Rounds Street and death of 29-year-old Justin Downey.

New Bedford Police received a 911 call on the morning of April 15 around 8:30 to report a fire at a home at 55 Rounds Street. Police, fire and rescue personnel rushed to the scene of the blaze. Fire officials were able to contain the fire to the second floor of the home. After extinguishing the fire, officials discovered a deceased male victim inside a second floor bedroom of the home. The victim was later identified as Mr. Downey, who had resided at the home.

Mr. Coggins appeared in federal court in Atlanta, Georgia earlier today and waived rendition back to Massachusetts to face the accessory to murder charge. Although it is unclear at this time when Mr. Coggins will be transported back to Massachusetts, once he does arrive in the Bay State he will be arraigned in New Bedford District Court.

Once more information is obtained regarding the logistics of his return to Massachusetts, this office will send out a follow up media advisory.

Our office will be unable to comment on the specifics of the case at this time as Mr. Coggins has yet to be formally arraigned and the investigation into the homicide remains extremely active and ongoing.