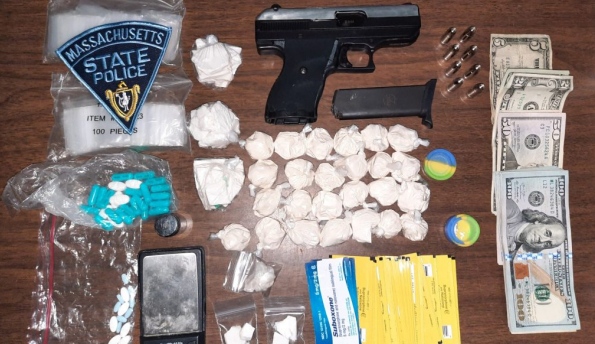 At 12:20 a.m. on Monday, December 20, Trooper Scott Boutell was on Route 2 in Westminster when his cruiser was passed by a Ford SUV with a defective exhaust that made excessive and unnecessary noise for any hour of the day. Trooper Boutell caught up to the vehicle and turned on his blue lights to conduct a stop. The vehicle sporadically swerved before coming to a stop in Gardner after several minutes.

Trooper Boutell approached the SUV, which had two male occupants. Trooper Boutell gave verbal commands for the driver to exit, and the passenger to keep his hands visible. Both occupants refused to follow instructions and became argumentative. Gardner Police officers responded to back up the Trooper and the driver and passenger were removed from the vehicle.

Troopers Christian Wolferseder and Joseph Leano arrived on scene as additional backup and were able to secure the operator DARYN TACY, 32, and the passenger CHRISTIAN WOLHOK, 31, both of Keene, N.H., in marked State Police cruisers. Troopers then completed a probable cause search of the vehicle after observing mace, a hatchet, and a container holding crack cocaine in the open interior of the vehicle.

The search discovered over 18 grams of heroin, over 340 grams of cocaine, various types of pills and prescription medication, a large amount of cash, and a black Hi-Point 9mm handgun along with 8 round of hollow point ammunition. Neither TACY or WOLHOK possess a license to carry a firearm.

Additionally, TACY was charged with:

1. Equipment violation (loud defective exhaust);
2. Fail To Stop For Police; and
3. Possession of Class B Drug.

1. Default from a court appearance.

WOLHOK also had two outstanding warrants for his arrest.