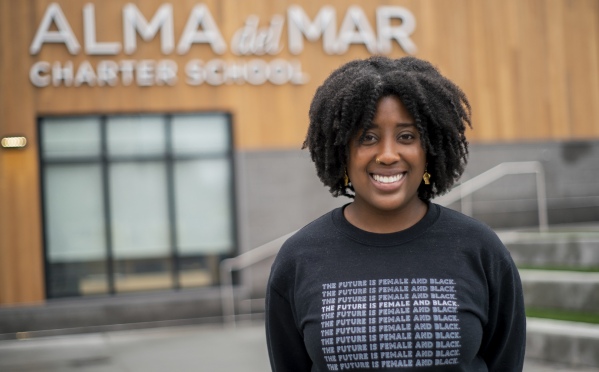 After a months long internal search process characterized by broad outreach and community engagement, the Alma del Mar Board of Trustees have selected Ms. Taylor DeLoach as the next Executive Director of Alma del Mar Charter Schools. Ms. DeLoach will be the first person of color and the first female to lead the organization. See Ms. DeLoach’s Faces of New Bedford here

A former classroom teacher and founding principal at Alma’s Frederick Douglass Campus, Ms. DeLoach was unanimously approved by Alma’s board on Friday, April 29.

“Taylor’s experience and past roles at Alma provide her with the institutional knowledge and affinity with Alma culture and practices to lead the two-campus charter school network as scholars and families continue to traverse the challenges of recovering from the pandemic,” said Ms. Jan Baptist, Chair of Alma’s Board of Trustees.

Alma’s Board of Trustees enthusiastically agreed during their meeting that Ms. DeLoach is well-qualified for the position and that she has the skill set that Alma needs for its growth and continued success in the years ahead.

“I joined Alma as a teacher fresh out of teacher training in 2014,” Ms. DeLoach said. “Since then, I have had the privilege of working with hundreds of scholars, families, and educators within the Alma community. I have enjoyed every moment of my time at Alma and in New Bedford, and I am lucky to be able to channel the love I have for our community into the work I do every day. I am honored to have the opportunity to serve Alma in this new role, and I look forward to continuing the critical work of serving our community.”

“I couldn’t be more thrilled that Ms. DeLoach will be taking the lead at Alma,” said Will Gardner, Founder and current Executive Director. “She is a truly gifted leader who always puts our scholars first and who deeply understands what it takes to make great learning happen. When I step down I know I will be passing the baton to someone who can build on what makes Alma so special and create even more opportunities for our scholars and families.”

In March of 2022, Founder and Executive Director Will Gardner announced his plans to step away from his role after 11+ years. At this time, the Alma del Mar Board of Trustees appointed a search committee made up of various board and former board
leaders to develop and execute an internal search process to find and secure Mr. Gardner’s replacement.

As a part of a commitment to ensuring family and community voice was present in the process, the Alma Executive Director Search Committee, under the leadership of Alma’s Board of Trustees Chair Ms. Jan Baptist, launched a series of Focus Group meetings and an anonymous survey targeting three specific stakeholder groups: Parents and Families, Alma Staff, and Community Partners and Supporters.

These efforts were focused on collecting feedback on the characteristics, skill sets, and opportunity moments for Alma’s next Executive Director, as well as the most pressing issues facing the school network’s next leader. This feedback was used in the evaluation and vetting process for Alma del Mar’s next executive director.

Taylor DeLoach is originally from Maryland and graduated from Wesleyan University in Middletown, CT. She began her career in education as a graduate student at the Charles Sposato Graduate School of Education in Boston, where she now serves on the Board of Directors. Taylor joined Alma’s team in 2014 as a first grade lead teacher and took on additional responsibilities as a teacher team leader a year later. In 2017, Taylor became an Academic Dean and co-teacher in third grade. She then held the role of Dean of Culture at Alma for two years before being named Founding Principal of Alma’s new Frederick Douglass Campus in 2019. Taylor was also a part of the 2020-21 cohort of Boston College’s groundbreaking Lynch Leadership Academy, which sharpens the skills of current and future school leaders and executive managers.

About Alma del Mar Charter Schools:
Alma del Mar operates two charter public schools in New Bedford. The schools are tuition-free. Alma’s mission is to put every one of our scholars on the path to college and to challenge them to be service-minded leaders. We achieve this mission by providing a demanding and supportive education to every scholar who walks through our doors.

Alma features a longer school day, a longer school year, high expectations for all scholars, and outstanding teachers from across the country. We currently serve 940 scholars across two campuses.