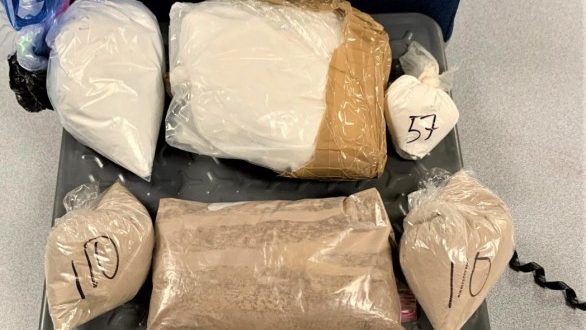 On Tuesday afternoon, Troopers from the Massachusetts State Police Gang Unit and fellow members of the North Shore Gang Task Force, including FBI and Homeland Security Investigations Agents and an Essex Sheriff’s Deputy, along with Lawrence Police detectives, arrested JOSE CARMONA, 30, of Lawrence, after arranging and executing an undercover purchase of approximately 220 grams of fentanyl.

The undercover buy was made at the intersection of Lexington and Buswell streets after being arranged the previous day. Surveillance officers had observed CARMONA walk a short distance to that location after exiting a rear basement door of a building at 81 Lexington St.

Following the arrest, Troopers and other Task Force Officers and Lawrence detectives went to the rear door at 81 Lexington St. and observed a common area. They found the door unlocked, entered the common area, and observed an apparent illegal apartment in a corner of the common basement.

When Troopers and Officers knocked on the door of the illegal apartment, it was answered by GABRIEL CARMONA-PIMENTEL, 35, also of Lawrence, who is the brother of JOSE CARMONA. Aware that CARMONA-PIMENTEL was the subject of an arrest warrant for trafficking fentanyl, police also arrested him.

The brothers were transported to the Lawrence Police station where they were booked. An MSP Gang Unit Trooper then applied for and was granted a search warrant for the basement apartment at 81 Lexington. During the subsequent search of the apartment Troopers and Officers seized the following:

• Numerous bags of suspected fentanyl inside a suitcase;
• Paraphernalia associated with the distribution of narcotics, including grinders, a scale, and packaging materials;
• Paperwork belonging to the CARMONA brothers; and
• A Puerto Rico identification belonging to GABRIEL CARMONA-PIMENTEL.

The total weight of suspected fentanyl seized during the search warrant execution was 1,224 grams with packaging. Along with the undercover purchase of 224 grams with packaging, the total amount seized by Troopers, Task Force Officers, and Lawrence Police in Tuesday’s operation was approximately 1,448 grams.

JOSE CARMONA was charged with the following offenses related to Tuesday’s seizures and prior undercover purchases during the same investigation:

In addition to the arrest warrant, GABRIEL CARMONA-PIMENTEL was charged the following offenses related to Tuesday’s seizures and prior under purchases during the same investigation:

The defendants were arraigned yesterday in Lawrence District Court.