Home / History / The story of one of New Bedford’s own, Corporal Leon J. Abrams; storming of Iwo Jima 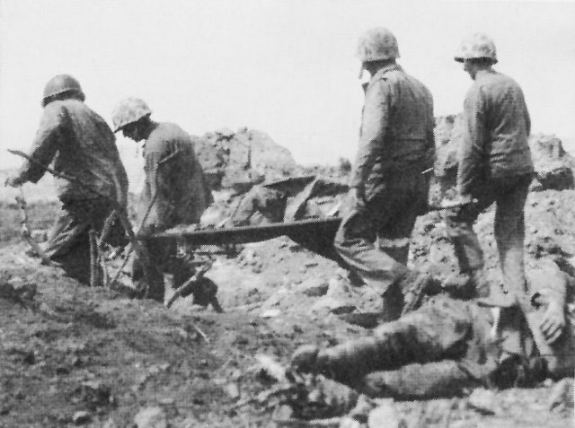 The story of one of New Bedford’s own, Corporal Leon J. Abrams; storming of Iwo Jima

Corporal Abrams joined up in 1943 and had participated in the island hopping campaigns in Kwajalein, Saipan, and Tinian, playing his part in turning the tide of the war in the Pacific and putting the forces of Imperial Japan on the backfoot. By 1945, the defeat of Japan may have seemed inevitable to some, but the fanaticism of the Imperial army made clear that a high price would be paid to bring the war to an end.

Military leaders considered Iwo Jima crucial to the strategy of of encirclement and roll back, pointing to the need for Iwo Jima’s airfields to assist B-29 bombing raids on the Japanese mainland.

The iconic image of the Iwo Jima assault remains: Marines’ raising the U.S. flag at Mount Suribachi (immortalized in the Washington, D.C. Marine memorial – replicated also in Fall River.) Lesser known, however, is that the scaling of Mt. Suribachi occurred February 23rd. At this point, a thousand marines and had been killed and over three thousand wounded, but the battle had just begun.

Moving inland, the Marines looked to capture capture Hill 382, the highest point of the island – an area the Marines labelled the “meatgrinder” – where the gain of 100 yards would cost hundreds of lives. The Japanese defenders, almost twenty thousand strong, refused to surrender. In addition, they had months to prepare their embedded defenses on the volcanic island. The Marines would have to force them out and the Hill was not scaled by the 24th division until 2 March.

Abrams fell on Sunday Feb 25, 1945. That day, the attack began at 06:30, with Abrams’ battalion the right flank of an assault on Iwo’s notorious Amphitheater – a rough terrain where no tank support was possible as mortar and machine fired rained down. Leading a four man fire team, non-commissioned officers like Abrams were among the first to fall. The official U.S. Marine Corps history reports that that on that day, it was not surprising that “…as usual, key officers and non commissioned officers were among the casualties.“

Abrams was buried in the Marine plot on Iwo Jima.