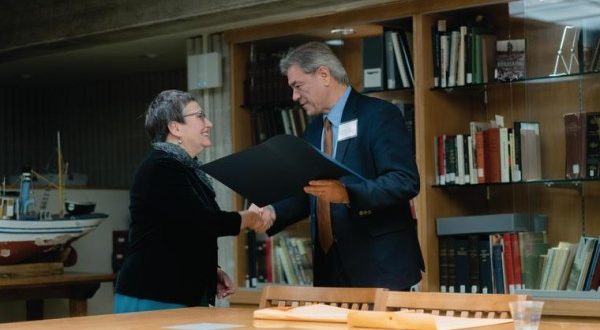 The meet and greet brought together Portuguese-American legislators and university officials.

The Ferreira-Mendes Portuguese-American Archives continued its 10th-anniversary celebrations with a legislative meet and greet reception on Monday, 16 December 2019. At the event, local Massachusetts legislators paid tribute to the former Faculty Director, Dr. Gloria de Sá, upon her retirement while also being introduced to the new Faculty Director, Dr. Paula Celeste Gomes. 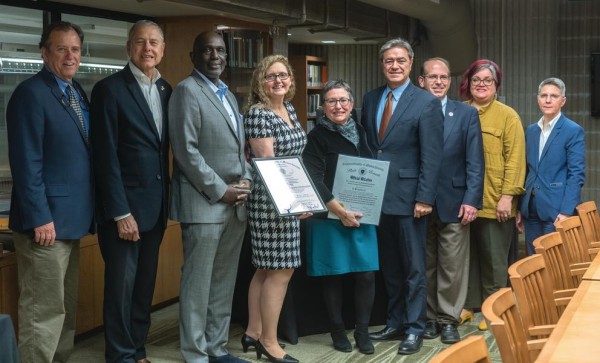 Representative Tony Cabral presented Dr. de Sá with two Citations of Recognition for her years of service, one from the House of Representatives and the other from the Senate. He commented on their years of friendship, her years of hard work, and her commitment to the community. Throughout the applause that followed, Dr. de Sá was visibly moved by the outpouring of respect and affection.

Representative Tony Cabral also presented Dr. Paula Celeste Gomes Noversa with a Citation of Recognition for the Ferreira-Mendes Portuguese-American Archives in honor of their 10th anniversary. While accepting the Citation, Dr. Noversa praised her predecessor and stated that she hoped to continue Dr. de Sá’s work on several long-term projects at the Archives, the most significant being the digitization of the Portuguese language newspapers from across the United States.

During her comments, Faculty Director Noversa noted that UMass Dartmouth resides in the most densely populated Portuguese-American region in the country. She went on to state, “We, the University and the Massachusetts legislature, serve the same community. When we are at odds with each other, we do them a disservice. We serve them better when we work together.”

She went on to say, “the Ferreira-Mendes Portuguese-American Archives has as its mission the preservation of the documents that bear witness to the history of the Portuguese-American community throughout the United States. I look forward to building upon the work of my predecessor and forging ahead with new and exciting projects.”