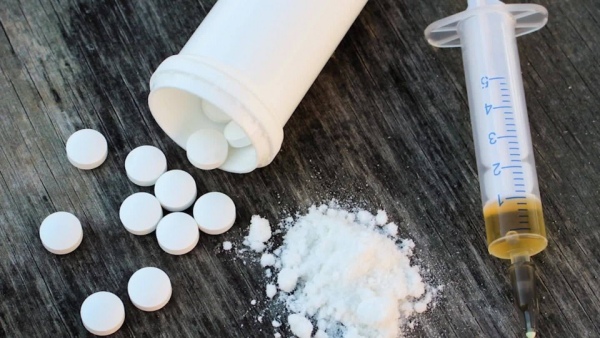 The leader of a North Shore-based drug trafficking organization (DTO) and his mother have been sentenced for their roles in a conspiracy that manufactured and flooded the streets of Massachusetts with hundreds of thousands of counterfeit prescription pills containing fentanyl made on high-volume pill press machines.

Yesterday, Vincent Caruso’s mother, Laurie Caruso, 52, also of Lynn, was sentenced by U.S. District Court Judge Nathaniel Gorton to nine years in prison and four years of supervised release. On Feb. 28, 2022, Laurie Caruso pleaded guilty to one count of conspiracy to manufacture, distribute and possess with intent to distribute fentanyl and other controlled substances.

“This family business has been shut down for good. Vincent Caruso was a prolific and violent drug trafficker who flooded North Shore communities with hundreds of thousands of deadly counterfeit prescription pills containing fentanyl. Caruso and his associates orchestrated numerous shootings and armed robberies using an arsenal of firearms – including machine guns – and then took to social media to brag about their incredibly destructive criminal conduct. That this all took place while he was on pretrial release is even more appalling. Caruso, along with his mother and co-conspirator Laurie Caruso, pumped poison and violence into our communities and you won’t be hearing from them on Instagram for a long long time,” said First Assistant United States Attorney Joshua S. Levy. “Thanks to the exceptional, coordinated efforts of our law enforcement partners, this career criminal will now spend over 20 years behind bars – out of our communities and off of social media. This office will continue its relentless pursuit of individuals who threaten public safety for the sake of profit.”

“Vincent Caruso, a self-admitted Crip gang member, and his mother, Laurie Caruso ran a major drug trafficking organization that, for years, brought nothing but poison, mayhem, and violence to the North Shore of Massachusetts, and beyond. They peddled hundreds of thousands of counterfeit pills containing fentanyl, capitalizing on those struggling with addiction, while raking in an obscene amount of money,” said Joseph R. Bonavolonta, Special Agent in Charge of the FBI Boston Division. “The severity of these sentences reflects the seriousness of their criminal conduct, and the tireless efforts of our North Shore Gang Task Force to make our communities safer for everyone.”

“ATF will continue to work in conjunction with our local, state and federal law enforcement partners to identify organized violent criminals in our joint effort to protect the public,” said James M. Ferguson, Special Agent in Charge of the Bureau of Alcohol, Tobacco, Firearms and Explosives, Boston Division. “The sentencing of a self-admitted gang member of the Crips in federal court for possession of a machine gun and dangerous drugs should send a loud and clear message to anyone who chooses to engage in this type of criminal activity; it cannot and will not be tolerated and you will be held accountable.”

The Carusos were arrested and charged by complaint on June 30, 2021 along with co-conspirators Ernest Johnson and Nicole Benton as part of an investigation that began in 2020 in response to an increased number of shootings in communities north of Boston by street gangs whose violence was fueled by drug distribution. Vincent Caruso was later indicted by a federal grand jury on Jan. 19, 2022. Benton has pleaded guilty to her role in the DTO and is scheduled to be sentenced on Sept. 8, 2022. Ernest Johnson has also pleaded guilty and is scheduled to be sentenced on Sept. 13, 2022.

Vincent Caruso, a self-admitted Crip gang member, operated a large and sophisticated DTO with multiple subordinates that sold counterfeit prescription pills containing fentanyl to street gangs for further distribution on the North Shore. Laurie Caruso served as her son’s right-hand in the operations and was the primary distributor for his well-armed DTO.

The investigation identified Vincent Caruso’s DTO as a common supply source of counterfeit pressed fentanyl pills and other controlled substances for several street gangs responsible for the uptick in violence. Vincent Caruso’s DTO distributed approximately 36 kilograms of fentanyl, largely in the form of pressed fentanyl pills – equating to a total of over 360,000 fentanyl pills – of which, a significant portion was manufactured directly by Vincent Caruso’s DTO itself using multiple pill presses capable of generating thousands of pills per hour. In order to move these quantities, Laurie Caruso personally distributed fentanyl pills for the DTO at all hours of the day and retrieved cash owed by drug customers. A single counterfeit fentanyl pill retails at between $10-$20, thereby generating millions of dollars in proceeds for the DTO. In an effort to conceal the DTO’s operations, Vincent and Laurie Caruso conspired to launder their illegal proceeds by conducting cash transactions through sports bets at a New Hampshire casino.

In furtherance of his drug trafficking activities, Vincent Caruso possessed and used firearms and orchestrated multiple violent offenses, including two armed robberies and a shooting involving a machinegun.

The first armed robbery took place on March 5, 2020, while Vincent Caruso on pretrial release for state fentanyl and firearm charges. He orchestrated an armed robbery and home invasion in which two individuals armed with a firearm and zip ties robbed the occupants of an apartment of approximately $18,000 and jewelry. Vincent Caruso dropped off the robbers, waited at a nearby coffee shop and returned to pick them up after the robbery.

In May 2021 a second armed robbery took place also while Vincent Caruso on pretrial release for state fentanyl and firearm charges. For this incident, Vincent Caruso enlisted associates to rob an individual. Surveillance video shows assailants run up to the victim, including one assailant who was armed with an AR-15 style rifle. The victim escaped and ran off. Police responded and chased the assailant, who threw the AR-15 style rifle in a dumpster. The assailant ran into the highway and escaped police.

A third violent incident took place shortly after midnight on June 29, 2021, in Lynn. For this incident, Vincent Caruso provided a fully automatic handgun to an associate. The associate then used a fully automatic handgun to fire dozens of rounds at a number of victims who were gathered on a porch. Bullets hit residences, vehicles and three individuals who were hit by the gunfire and survived. This incident was captured on surveillance video.

In addition, while on state pretrial release Vincent Caruso sent dozens of photos and videos via social media that depicted him in possession of firearms and machine guns, large quantities of fentanyl that would be distributed by his organization, large amounts of cash and high-end jewelry.

Over 1.5 kilograms of pressed fentanyl pills, over 12 firearms, multiple luxury brand watches, chains, four medallions, two custom ATVs, a dirt bike and over $177,000 in cash were recovered through various search warrants executed in this and related investigations.