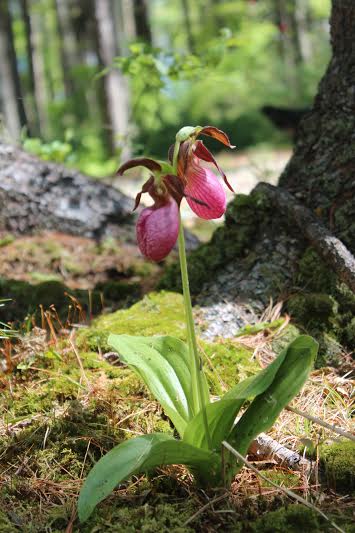 The month of June is a special time of year. It is a wonderful time to get outside, especially to the forest where the earth has woken up and the ground is teeming with flora and fauna. One fascinating group of plants that make themselves known during this time are our local orchids- beautiful, delicate flowers that can bloom anytime from late April through July. Orchids are a cosmopolitan species- this means that they can be found growing wild on every continent on Earth except Antarctica. There are approximately 25,000 known species of orchids, and many more have yet to be discovered.

Orchids are popular the world over for their beautiful flowers. These flowers are often very colorful and complex, can smell quite lovely and are bilaterally symmetrical (the two halves of the flower are mirror images of each other). A familiar species is the vanilla orchid, from which vanilla extract is made. Many orchids are epiphytes, meaning they can live on another plant (on a tree branch, for example) and gain their nutrients from the air and rain as opposed to receiving them from the soil. Orchids make up anywhere from six to eleven percent of all seed plants. Around 100,000 different hybrids and cultivars of orchids have been created, and these beautiful plants are a favorite among artists, botanists, biologists, and horticulturists alike.

Here in Massachusetts we have a handful of local orchid species. Some of these species do not have showy, colorful flowers and can be easy to overlook. Lady’s slipper orchids, on the other hand, are a group of orchids that have a beautiful flower that is said to look like a fancy woman’s slipper. Massachusetts has a small collection of lady’s slipper orchids, the most familiar species being the Pink Lady’s Slipper, sometimes called the Moccasin Flower (scientific name: Cypripedium acaule). These common orchids are characterized by a bright pink, magenta or white “slipper”-shaped flower with brownish lateral petals, and two leaves at the base of an otherwise leafless stem. These orchids only grow about a foot high and can be seen in a range of habitats, preferring conifer forests with well drained, acidic soils.

There are three species of endangered lady’s slipper orchids here in the state. Because of their fragile population status, they are protected by the Endangered Species Act and are much better off when merely observed by passers-by (including, but not limited to, humans and deer). These orchids should not be picked or transplanted! Endangered species include: the Showy Lady’s Slipper, which looks very similar to the Pink Lady’s slipper except for its height (it towers above the Pink Lady’s Slipper at almost 40″) its color (white lateral petals instead of brown) and its leaves (many leaves, instead of just two); the Small Yellow Lady’s Slipper (similar to the Pink Lady’s Slipper in size, except its “slipper” is yellow); and the Ram’s Head Lady’s slipper, a tiny and unique plant with a purplish “slipper.”

Threats to lady’s slipper populations include: deer browsing, illegal picking or sale of the orchids, competition by invasive species and habitat destruction. Some species of lady’s slipper orchids take years to mature and therefore recovery from a disturbance can be slow and difficult. I have long heard (and believed, until recently) the rumor that Pink Lady’s Slipper orchids were endangered and it was illegal to pick them. It turns out, however, that the Pink Lady’s Slipper is quite common, and is not under protection. Apparently there is a law from the early 1900’s, technically still in effect, that forbids the plucking or transportation of any wild orchids in Massachusetts. Whether or not this law is being enforced for Pink Lady’s Slippers, or what the consequence may be for disturbing them, I am not certain. All orchids, when encountered in the wild, should be treated with respect and should be left exactly as they were found. Even the Pink Lady’s Slipper has a very low likelihood of survival if transplanted.

I have seen many Pink Lady’s Slipper orchids blooming over the past few weeks, but have not been able to catch a glimpse of any other variety. I am curious to find out if anyone has seen these endangered flowers growing wild in forests on the South Coast? Their blooming season is coming to an end, but there may still be time to catch a glimpse of one of Massachusetts’ very own (and very special) orchid species. To find out more about the different species of orchids here in Massachusetts, please visit: the Natural Heritage and Endangered Species Program website: www.nhesp.org.