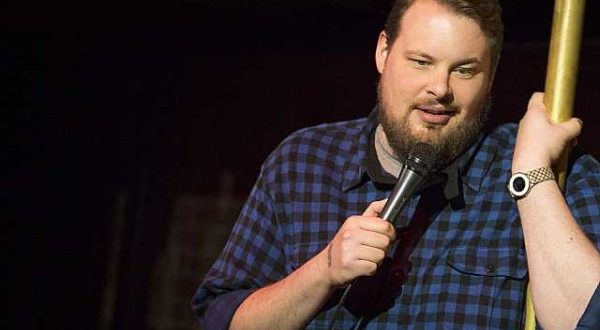 Weather permitting, the June edition of KILBURN COMEDY COVE will take place in the building’s newly refurbished courtyard. Should Mother Nature not cooperate, comedy night will happen in its usual venue, the stunning KILBURN EVENT CENTER.

Tickets for the evening are only $20 and can be purchased online here. Parking is free, and adult drinks and snacks will be available for sale. Seating is general admission.

Headlining the evening is Ray Harrington – an infectiously charming comedian who performs across the globe with hilariously irreverent material and marvelous improvisational riffing that embraces the uncomfortable and the absurd with a smile.

His documentary BE A MAN won the LA Comedy Festival and was featured as ‘New and Noteworthy’ Internationally on iTunes before premiering exclusively on Hulu. His first album from Stand Up! Records, The Worst Is Over, debuted at the top of the comedy charts on Amazon and iTunes. His latest album, Overwhelmed, debuted at Number 1 on Amazon and at the top of the Billboard Comedy Charts.

Ray was also named Best Comedian by the Providence Phoenix, was selected for Comedy Central’s ‘Up Next’ Showcase, was a finalist in the Boston Comedy Festival, and was invited to host the International Filmapalooza Awards in Hollywood.

He was awarded Best Documentary at the LA Comedy Festival as well as the SNOB Film Festival, and premiered his film BE A MAN at the New York Comedy Festival. Ray has been heard on nationally syndicated radio along with Sirius/XM and he’s been seen on Hulu, ABC, FOX, and SBS Australia.

Featured comedian is E.J. Edmonds. In June 2006 in Fredericksburg, Virginia, E.J. Edmonds took to the stage for the first time to share his ‘views’ with the public. His confident demeanor, blunt sarcasm, and the ability to make fun of himself and his life quickly made him a favorite among comedy-lovers in the Northern Virginia area.

E.J. has taken his uncanny ability of seeing the humor in real-life stories and turned his stories into real-life comedy. This talent, coupled with his abstract views of the world, make E.J. Edmonds an act you won’t want to miss.

Your host for the evening will be J.J. Jones.

ABOUT KILBURN MILL AT CLARKS COVE
Built just after the turn of the 19th century for textile manufacturing, Kilburn Mill today is home to special events, small businesses, artists studios and its famous antique center. It’s located at 127 W. Rodney French Blvd, blocks from Rte. 18 with easy access from I-195. Learn more at kilburnmill.com.