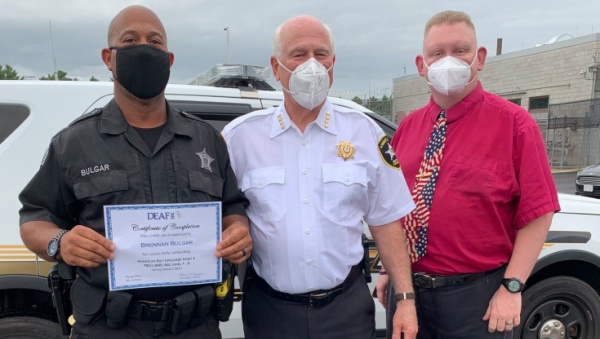 As a K9 Officer with the Bristol County Sheriff’s Office, Brennan Bulgar can be called to any number of emergency situations from North Attleboro to Fairhaven at any time on any day.

And he’s going above and beyond the call of duty to make sure he can communicate with anyone who may be in distress.

“It’s been a very positive experience,” Officer Bulgar said. “I could come across a non-verbal autistic child or someone hard of hearing in distress, let alone an inmate with these special challenges, so being able to converse with them through sign language can make these situations a little easier and less stressful for all involved.”

Hosted by Deaf Inc. in Downtown New Bedford, the sign language classes are usually held in person during the week. That was the case for ASL 1 and 2, which Officer Bulgar completed over the last few years. But with COVID, the ASL3 class was held virtually over Zoom, and it was certainly not your average sign language class.

“It was very challenging, that’s for sure,” Officer Bulgar said of trying to follow the instructor and the rest of the class over Zoom. “The people I’ve met in these classes are such great people, so even though it was a little harder than we expected, we got through it with smiles on our faces.”

Officer Bulgar is moving on to ASL4, which is slated to start in September. In the meantime, he wished to thank his family and friends for the encouragement to start learning sign language, as well as Sheriff Thomas M. Hodgson, Supt. Steven Souza, K9 Capt. Paul Douglas, Chief of Staff Elizabeth Doyle, and Brock Cordeiro of the BCSO and the Mass. Commission on the Deaf and Hard of Hearing, for their support in this venture.

“Brennan is the picture perfect example of what a Bristol County Sheriff’s Office public safety professional is,” Sheriff Hodgson said. “He’s dedicated. He works hard. He’s always there to support his brothers and sisters inside the jail and out in the community, and he always has the upmost in pride and professionalism. I wasn’t the least bit surprised when he said he wanted to take sign language classes, because that’s just the kind of person he is; someone who truly will go out of his way to help others in need.”