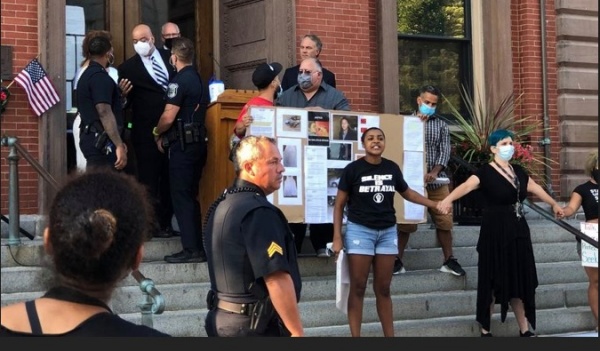 Last week community leaders from BREATHE! and From The Community, For The Community New Bedford Black Lives Matter movement decided to honor Congressman John Lewis’ legacy by “answering the highest calling of our heart and standing up for what we truly believe in” JUSTICE!

We were shocked to discover that the New Bedford Human Rights Commission had scheduled Jon Mitchell to speak at a local vigil for Congressman John Lewis. We felt that this was completely inappropriate because Mitchell has actively participated in the cover-up of the New Bedford Police murder of a 15-year old child, Malcolm Gracia.

For over eight years Jon Mitchell has advanced the false claim that Tyson Barnes had life-threatening injuries and was stabbed multiple times by Malcolm Gracia, despite clear evidence he was not. As such, we consider it completely reprehensible for Mitchell to invoke Black Lives Matter supporter Congressman John Lewis’s memory while denying the call for justice from the local Black Lives Matter movement.

Fittingly, it is Congressman John Lewis’ words that inspired us to turn words into actions and make the decision to “get into good trouble, necessary trouble”. We decided that it was irresponsible for Jon Mitchell to be allowed to speak at a vigil for Congressman John Lewis while actively denying justice for Malcolm Gracia. As Jon Mitchell got to the podium we positioned ourselves peacefully on the stairs of city hall with posters and began calling out for justice for Malcolm Gracia.

We informed the event’s emcee, Rev. David Lima that we would let the program continue for all other speakers however we would not be silent when and if Jon Mitchell attempted to speak. When Rev. Lima asked us to compromise this position, we said certainly we would agree to move off the stairs if Jon Mitchell agreed to simply say “Justice for Malcolm Gracia!”

Jon Mitchell chose not to; so we chose to continue exercising our freedom of speech until Mitchell decided to forfeit. When Rev. Lima informed us that Mitchell would no longer be speaking we obliged and moved a few steps lower.

To our shock, some members of the New Bedford Human Rights Commission and the clergy community decided to find their voice and express outrage at our decision to honor Congressman John Lewis by living the afterlife of his words. Astonishingly, these same voices of critique have been so silent and seemingly at peace with the cover up and murder of Malcolm Gracia.

What if Malcolm’s last name matched their own? I imagine any outrage and frustration would be directed a different direction and many would be standing in solidarity with the call for justice for Malcolm Gracia.

Some stated our actions were not peaceful because they disrupted Jon Mitchell’s speech. To those of this opinion I would ask them to reflect on Dr. Martin Luther King Jr.’s quote “True peace is not merely the absence of tension; it is the presence of justice.“ So where there is no justice there is no peace. We are actively calling for justice and in that we are calling for peace.

Ironically, Jon Mitchell had the nerve to claim in the paper that it was “unfortunate that we expressed our opinion in an irresponsible way”. Jon Mitchell what is unfortunate is the fact that for over eight years you have failed to accept the responsibility to ensure the right to life, the right to liberty, the right to the pursuit of happiness, and the civil rights of all of New Bedford’s citizens including Malcolm Gracia.