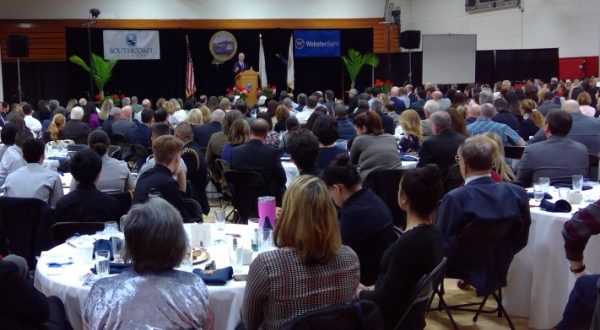 Highlights from Mayor Mitchell’s “State of the City” address

“New Bedford is on a roll. As recently as 2012, the city was still reeling from the Great Recession, with unemployment rate over 13%, a crime rate well above average among America’s cities, precarious finances, absentee landlords running neighborhoods, a port stumbling as a result of the crash of the ground fish industry, a directionless school system that had been placed under state monitoring the year before, and neglected city buildings and roadways.”

“We can stand here today and take pride that through the collective efforts of our residents, businesses and city employees, New Bedford is staging one of America’s most remarkable urban turnarounds.”

The City’s Economic Turnaround
“There are some six thousand more city residents working today than in January 2012, and an unemployment rate that stands today at 4.7%. Our business park is now full, the port is humming, and small business have sprung up everywhere.”

Making Neighborhoods Safer
“New Bedford is a palpably safer city now. According to the FBI crime data, violent crime has fallen over fifty percent since 2014 – here, too, among the sharpest drops anywhere. Our goal is to get to the point when residents of not just most, but all neighborhoods can take their safety for granted, so that parents even in historically struggling neighborhoods can let their kids out to play, and seniors can sit on a park bench without thinking twice about it.”

Turning Around Our Schools
“It wasn’t that long ago that people looked at the city’s four-year high school graduation rate hovering around 60%, and said, that’s just the way it’ll always be. To my mind it was unconscionable to write off children like that; they deserved better from us. Thanks to the work of school administrators, the non-profit sector, and many adults in this building, the state announced that the graduation rate has now climbed to 76%, the highest ever recorded here. That’s a whole lot of New Bedford kids who have a much better shot to make it in the world. This is an achievement that should fill everyone in this room with pride.

“I’m tremendously confident in our school leadership. Superintendent Thomas Anderson has set the right tone from the start. His standards are appropriately high, but the focus of his work is to enable administrators and teachers to develop the capability to reach those standards. He has everyone working together”

Economic Growth and City Finances
“The Regeneration Committee under the leadership of Tony Sapienza and Gerry Kavanaugh has been critical in this effort. The committee has brought together the business leadership of Greater New Bedford and has worked closely with my administration to develop and execute an economic development plan. Few cities in America have this kind of formal mechanism to collaborate with business.”

“We will make every effort to expand the tax base by encouraging the development of underutilized parcels of public property. This is why the municipal golf course redevelopment project is important. The project was put on pause because of state supreme court decision that complicated the land transfer, but it is now moving forward again.

Transformation of the Port of New Bedford
“According to a recent analysis funded by the state, the Port generated some $11 billion in direct and induced economic activity, and supports nearly seven thousand jobs.”

“We’re in the midst of a physical remaking of the port the likes of which the city has not seen perhaps since the whaling era. Thanks to funding from the Baker-Polito administration, the deeper dredging of channels and berths will bring the harbor to its authorized depth for the first time since the 1950’s. [And] we will build a new major port facility thanks to a $15 million federal grant that Senator Ed Markey helped us secure a few months ago which will give us even more room to grow.”

Roads and Infrastructure
“With the completion of major infrastructure upgrades like the long awaited renovation of the Elm Street garage and the rebuilding of Union Street, we’ll usher in more restaurants, shops, and other development still.”

“As much as we want our city to look good, we also want it to work well. That’s why, with the city council’s support, we’ve increased annual road maintenance funding by nearly 75%. We’ve spend millions in fixing up city buildings, of which there are now some 96, and retrofitted them to be more energy efficient. It’s also why we’re investing tens of millions of dollars to make sure the city’s drinking water is safe and affordable.”