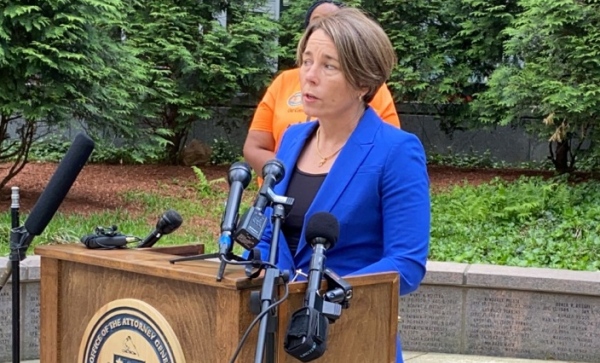 Attorney General Maura Healey will report raising more than $400,000 in December, the Democrat’s largest fundraising month ever, adding to the $3.3 million she has on hand as she weighs whether to seek the governor’s office this year.

Healey’s campaign committee said Monday that she raked in $403,351 from 1,140 donors last month, more than doubling her previous monthly record. The haul brings her campaign account’s balance to $3,666,104.

“Maura is grateful for the tremendous support she continues to receive from every corner of this state,” said Corey Welford, a Healey committee spokesman.

Chang-Diaz’s monthly total came from more than 650 contributors, 80 percent of whom live in Massachusetts, and she more than doubled her take from November. Seventy-two percent of the Jamaica Plain Democrat’s donations were for $100 or less.

“It’s clear that Sonia is the people’s choice for Governor,” said Joshua Wolfsun, Chang-DÃ­az’s acting campaign manager. “This campaign is being powered by working families across the state who know it’s time for real, urgent change in our government. Sonia’s led that fight for her whole career and beaten insiders’ assumptions over and over â€” and people across Massachusetts are joining her to do it again.”

According to Healey’s team, 91 percent of donors contributing to the attorney general’s political committee were from Massachusetts. The complete report has not yet been posted online by the Office of Campaign and Political Finance.

Healey has been openly weighing whether to run for governor in 2022, but the focus on her decision has intensified in recent weeks since Gov. Charlie Baker and Lt. Gov. Karyn Polito both said last month they would not be candidates for the office this year.

Over the summer, Healey said she hoped to make a decision by the fall, but as the seasons have changed the window for her to announce a decision before Democrats caucus in February to elect delegates to the statewide nominating convention later this year has narrowed.

Last week, former state Sen. Benjamin Downing announced that he was withdrawing from the race, citing a lack of funds to continue. Downing’s exit left Chang-Diaz and Harvard professor Danielle Allen as the two major declared candidates in the race, with U.S. Labor Secretary Marty Walsh also weighing a run.

Allen had a total of $386,270 in cash on hand at the end of November, while Chang-Diaz’s campaign said she now has $248,000. Interest in support Healey surged after Baker’s decision last month, with supporters holding a number of events for the attorney general in December.

December is typically a big month for elected officials to fundraise around the holidays in an effort to max out donors before the new year when contribution limits reset and supporters are free to give again. Individual donors are allowed to give up to $1,000 a year to any one candidate’s committee.