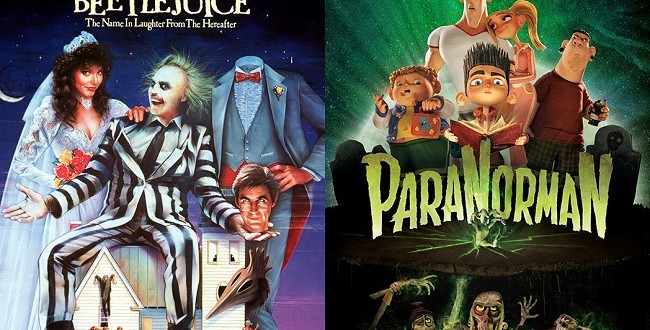 Happenings at The Zeiterion: Spooktacular Saturday

The Zeiterion Performing Arts Center wants to get you in the mood for Halloween with four movies during the annual Spooktacular Saturday, on October 29. The day begins at 1:00 p.m. with a double-feature of family-friendly seasonal favorite movies, the animated “ParaNorman” and “Beetlejuice,” continues at 6:30 p.m. with the silent classic “Dr. Jekyll and Mr. Hyde” along with live accompaniment on the 1920 Wurlitzer organ, and concludes with the cult favorite “Rocky Horror Picture Show” at 9:30 p.m. Tickets range from $7.50 to $15 and are available at www.zeiterion.org, 508-994-2900 or at the Zeiterion box office, 684 Purchase Street, New Bedford.

Kicking off the Spookathon Saturday is “ParaNorman,” the animated tale about a misunderstood boy who takes on ghosts, zombies and grown-ups to save his town from a centuries-old curse, featuring the voices of Anna Kendrick and Casey Affleck. It’s followed by “Beetlejuice,” starring Michael Keaton as the titular “bio-exorcist” contracted by a recently deceased couple played by Alec Baldwin and Wareham-native Geena Davis, in order to remove the obnoxious new owners of their house. “ParaNorman” starts at 1:00 p.m. and “Beetlejuice” at 3:00 p.m. Tickets are $10 to see both movies in the double-feature.

The Z’s famed Wurlitzer organ will provide the soundtrack to a great American horror film, “Dr. Jekyll and Mr. Hyde.” Organist Bernie Anderson plays the suspenseful score as the silent movie unfolds on screen, telling the story of the benevolent Dr. Jekyll (John Barrymore) as he explores the other side of his personality with an enlightening concoction. Experience the classic story in a unique way and find out if Dr. Jekyll will be able to control his evil alter ego. “Dr. Jekyll and Mr. Hyde” begins at 6:30 p.m. and tickets are $7.50.

Live actors provide a simultaneous shadowcast of “The Rocky Horror Picture Show” as the tale of a young couple stranded at the bizarre residence of Dr. Frank-N-Furter unfolds on screen behind them. The 1975 movie starring Tim Curry and Susan Sarandon holds a unique place in film history. The cult classic comes to life, with heavy audience participation. The Rocky Horror Picture Show begins at begins at 9:30 p.m. and tickets are $15. R-rated.