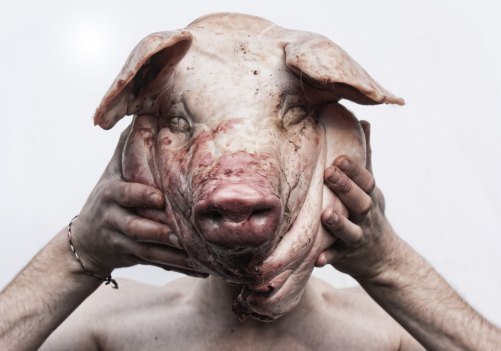 >While the Pigman is based in Vermont, perhaps he'll be visiting your neck of the woods soon. Is he a psychotic serial killer? Mutant? Prankster? (Getty Images)

Derry Fairy
The Derry Fairy was first revealed to the world by a Derry, New Hampshire man in the 1950s who went into the woods to harvest some Christmas trees to sell. He ran into a 2′ tall little green man, with long, droopy ears, reptilian eyes and wrinkly skin.

After a few moments of staring, both decided to carry about their business – keeping an eye on one another.

The unnamed man had some time to think. Whether for fame, because he wanted a new pet or because no one would believe him, he decided to tackle the little green man and take him home. “I’m going to love him, squeeze him and hug him and call him George.” he must of thought.

Problem was that after he grabbed George, he let out a shrill scream that was so piercing that it stopped him in his tracks and made him unsettled. This allowed George to escape and ne’er be seen again.

Dover Demon
The Dover Demon is a similar legend from here in Massachusetts – this one from the late 1970s. This one started when 17-year-old young man was driving along minding his business when he spots a creature standing on a mortar-less wall. Like the Derry Fairy, he had wrinkly skin, weird eyes but the difference was that the Dover Demon wasn’t 2′ tall, he was more like 9′ or 10′ feet tall and had tendril-like fingers. Great – I could beat up George, but think my chances are much slimmer with his dad.

Soon many sightings followed. Some even swore “…on a stack of bibles.” Of course, the Dover Demon was explained away as a moose, foal or prank. Because we all know how hard it is to tell the difference between a moose and a humanoid. Sometimes I even mistake people for moose, but that’s another story.

When Joe isn't writing, he's coaching people to punch each other in the face. He enjoys ancient cultures, dead and living languages, cooking, benching 999#s, and saving the elderly, babies and puppies from burning buildings. While he enjoys long walks on the beach, he will not be your alarm clock, because he's no ding-a-ling.
Previous Election Commission Reminds Voters of Deadline to Register to Vote in Nov 3rd Election
Next Two to be Arraigned Tuesday for June 25th Motor Vehicle Fatality